On Monday, he took to his Instagram page to announce his new management.

Peter, who performed alone at an event in Abuja on Saturday, March 12, released the contact details of his new management.

“Work Mood ???????? Thanks for all your concern and remain blessed as always. For bookings and enquiries, please contact my new management,” 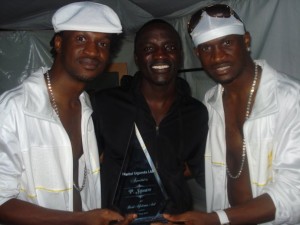 For the first time since the group was formed in 1997 and ‘Smooth Criminals’, Peter addressed himself as Mr P without mentioning PSquare.

The 34-year-old musician and singer released a single track titled Look Into My Eyes and did not feature Paul Okoye, his brother and other half of the group. The track is the first music by either member of the group without featuring the other.

The Glo ambassadors who hit limelight in 2005 after the release of their second album ‘Get Squared’ had a fight on Twitter few weeks ago.

Things seem to have spiralled out of control since the dispute that occurred as a result of an announcement by Peter Okoye that Jude Okoye, their brother and manager, had been relieved of his duties as the group’s manager.

The Anambra indigene has also announced a concert scheduled to hold in Dubai on April 7, and he is billed to perform alone as ‘Mr. P.’ at the concert.

The group’s name PSquare is still on his social media account bio, but he has been performing alone and has also freshly added ‘Mr P’ to his bio.

Paul Okoye, the other half of the group, has not made any comment on the issue but he recently released a track with Tiwa Savage for an endorsement deal he got with the Mavin songstress.

Since the beginning of their career, the group has been nominated for 37 awards and has won 17 of them.