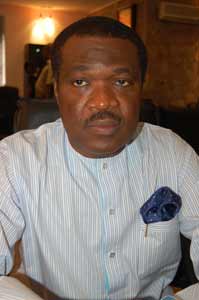 There is a Yoruba adage that says, “Good parenting can’t be bought”. And it would be right to say the Commissioner for Commerce and Industry in Ogun State, Mr. Bimbo Ashiru, was born well which is the reason he has been able to achieve so many things without losing his head.

For someone who had attained a very high position in one of the country’s leading financial institutions before being appointed into the cabinet of Senator Ibikunle Amosun where he has been thriving without losing himself, he’s what the Yoruba call “Omoluwabi” which simply means he was well brought up.

The Ijebu-Ode-born commissioner who still claims to be a banker was the group head, Public Sector of Stanbic IBTC before his appointment is of the belief that all he ever achieved was due to his parents who taught him the essence of life. According to him, “I had a good upbringing and even though we were a very large family, we were brought up to love, have respect for our elders and be humble. We were brought up to know the values of life. My father used to tell us that we were all  brought up in this Ijebu land and we must not to go to Buckingham Palace and suffer from inferiority complex.”

Despite his achievements since becoming a commissioner, Hon. Ashiru believes that what needs to be done is to be given attention and this informed the fact that he works as hard as possible to help re-strategize the state commerce and industry. Already adapted to working late during his period in the banking industry, he cannot be said to have a definite closing time while also finding time for his family as well as attend social functions.

He is of the school of thought that believes being in power should not cause one to start neglecting their health which is the reason on several occasions he has been described as “a fitness freak” as he still finds ways to use the gym despite his very tight schedule. His time in the gym also gives him the look others truly envy.

It is also not surprising whenever one reads all sort of things about his kind of person because his short stint in the public sector has so far distinguished him from the pack and this has made him a threat to many who now see him as a problem to their political careers and it is for this reason they employ the act of bad publicity to smear his soaring image. Yet, he is unperturbed by the scheme of those who see him as political threat as he’s at the moment very committed to his work in attracting investors to Ogun State as well as working with other cabinet members to give the investor an enabling environment to work in.

Though he was expected to be a doctor, his desire to help the people pushed him into banking as he  believes that it is only when you can meet people’s financial needs that you’ll be able to help them. On people’s expectations while growing up he said, “People thought I was going to become a doctor and even called me ‘doctor.’ I thought about how I could affect people and the only way you can achieve that is by helping them. In addition, how can you help them? It is when you work where there is money. I have gone through all aspects of banking and if I did not love what I am doing, I would not remain there.  Moreover, there was a friend whose father was a manager in a bank. Then, I would see him dressed in his suit/tie which was an added inspiration for me.”

A graduate of the University of Ilorin and armed with a masters’ degree in Business Administration in strategic management, he explained that he abhors all forms of dishonest practices as integrity must come first in the life of every banker and this he believes is the only collateral one should have in life.

Unlike most in politics he believe life should continue after political office and that one should not depend solely on politics which is the reason some people see it as a do or die affair believes that political office should not change people as he still picks his calls himself and does whatever he likes only that he would not act anyhow so as not to bring disrepute to the administration he is serving as people may read meanings to anything he does.

Ashiru believes all work and no play makes Jack a dull boy. According to him, “I do a lot of exercise. I go on the treadmill and also spend plenty of time with my family. I am an Ijebu man and we love and appreciate ourselves, so we do a lot of merriment. For me, where I need to go and socialize I do, where I do not, I sit back at home and relax with the family.”