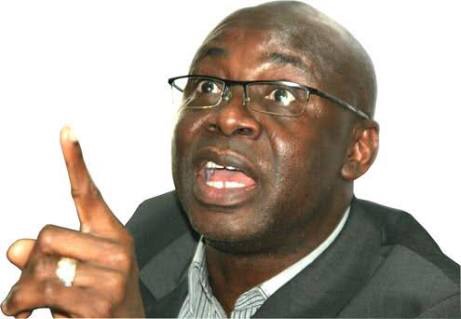 Fiery pastor,Tunde Bakare is at his best element last Sunday 17th July,2016 during his normal preaching to the member of his congregation. The founder of Latter Rain Assembly who is known for his criticism of bad government policy didn’t mince words to condemn the recent appointment of Bala Hadiza as the Nigerian Ports Authority Managing Director by the Buhariled government.

Bakare who was Buhari’s vice presidential candidate during the 2011 election queried the appointment, Bala Usman a 40 year old woman on what initially seem the president efforts towards inclusivity, but that is not the case. He also question her lack of experience relatively to occupy such a pivotal position, thereby raising the issue of nepotism and questioning his objective towards the constitutions and its provisions. Pastor Bakare stated during his sermon that to become an NPA Managing Director, he/or she must have a 15 years cognate experience, but in this case that was not the case. Buhari had been serially accused of breaching some provisions of the constitution and ditto for the new appointment made at NPA through the recommendation of Hon minister RotimiAmaechi.
Bakare in his word said “Nigeria does not belong to the North, Nigeria does not belong to the South, Nigeria belongs to God, and any attempt to northernize Nigeria will be resisted by all every right thinking Nigerian.”

”Whoever is goading the presudent is misleading him.This is the time to rebuild Nigeria, not to northernize Nigeria.”

Prior to her latest appointment, Bala Usman was the Chief of Staff to the Kaduna State Governor, Nasir-el-Rufai, and has worked under him for the most part of her career. After a year as a research assistant at her father’s NGO, the Centre for Democratic Development and Research Training, in Zaria, the graduate of Business Administration, and Development Studies has spent well over a decade working under el-Rufai; four years (2000 – 2004) at the Bureau of Public Enterprises (BPE) with el-Rufai as the Director-General of the agency, four years (2004 – 2008) as his Special Assistant on Project Implementation.
She served as the Director of Strategy of Good Governance Group, a non-governmental organization founded by el-Rufai and a few colleagues, from 2011 -2015 and was appointed Chief of Staff in his government last year. Which of these positions qualify her to head a top tier government agency? ‘if we are to be honest with ourselves, a person with that credential is not qualified to handle a delicate task of managing our ports. Being a personal aide is entirely different from heading a very strategic agency like the NPA’. The position of NPA MD should have been advertised, and have people interviewed and select the best candidate, which must have been seen to have passed through due process. If anything, Nepotism is corruption. Is she the best candidate for the job? Nepotism or god-fatherism is the problem of Nigeria and it stalled progress of governance.