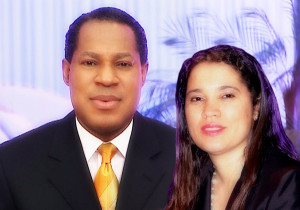 < [showads ad=GLO]/a>Following the big breakup of Christ Embassy’s general overseer, Pastor Chris Oyakilome and wife Anita, it seems there is no going back for the once hot Christian couple as wife threatens to sue the jerry curl-loving “man of God”.

Anita, Global News gathered, is threatening her estranged husband over the widely accepted and well-read monthly devotional journal,“Rhapsody of Realities” which, of course, was hitherto handled by the duo. [showads ad=GLO] The journal is reported to gulp in $20 million as sales, which both husband and wife would have a substantial share. Now that their marriage has finally packed up, the question is what happens to the money to be made henceforth from the sales of Rhapsody of Realities.[showads ad=GLO]

It is a fact that Christians who read the booklet are used to the pictures of both Pastor Chris and Anita on all the pages of the journal.[showads ad=GLO]

We can authoritatively inform you that the last edition of Rhapsody of Realties, September 2014 edition, parades just the picture of the couple at the back cover, which in our own imagination is a sendoff picture.[showads ad=GLO]

In a recent interview with the media, Pastor Oyakilome said that all Nigerians should pray vividly for his wife, that she needed prayers for her mental craziness.[showads ad=GLO]

As if that was not enough for the pastor,[showads ad=GLO] he allegedly fired some of his senior pastors on the grounds that they were working hand in hand with his estranged wife to bring him down.

The pastor narrowly saved his branch in South Africa from losing members to a new generation church called Spirit Embassy. The new church was founded by a former member of Christ Embassy who happened to be very close to Pastor Chris Oyhakilome. [showads ad=GLO] Well, many insiders believed that this is a sort of nemesis as Pastor Chris’s dad was reported to be part of the founding fathers of Assemblies of God Church before his well-connected and popular son deviated to form his own church. [showads ad=GLO]