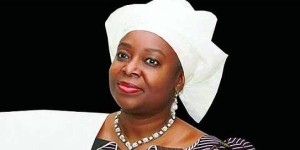 As the current mindboggling and outrageous revelations from the $2.1billion arms procurement probe, otherwise referred to as Dasukigate is gathering huge momentum and garnering national interests, especially with the revelations so far not having revealed anyone who was given money specifically for the purpose of procuring arms and failed to deliver. What we have seen and heard so far borders on the bizarre and utter disregard of key actors of the last administration for the constitution, due process and to the people of Nigeria.

One woman who is presently enmeshed in the messy deal is former Minister of State for Defence, Chief Mrs. Olajumoke Akinjide. The daughter of ex-Nigerian diplomat, Richard Akinjide is being accused of collecting huge sums from the arms deal case. Global News gathered that Ms. Akinjide, whose ministry is directly involved in the possession of the arms meant to curb the insurgents of the dreaded Boko Haram sect and other security issues in the country allegedly diverted the funds given to her for other reasons.

Meanwhile, investigations into how the former Minister of State for the FCT conducted the affairs of the State’s campaign organization revealed that many within the Oyo PDP fold itself, as well as within the alliance parties, are aggrieved with the manner Oloye Jumoke Akinjide coordinated and managed the Jonathan campaign in Oyo State, especially in the area of funding. Said a source within the PDP ranks who pleaded anonymity, “one of the reasons former President Goodluck Jonathan lost in Oyo State was the former Minister of State’s inability to properly mobilize political leaders and their followers with adequate funding”.

Continuing, our source claimed “rather than fully deploy the resources received for the purpose of the election, Oloye Akinjide was ‘alleged’ to have pumped money into her Olajumoke Akinjide Foundation (OAF) and OAF Microfinance bank” both of which are said to be her “conduit pipe and cash cow” for the realization of her 2019 political ambition. Our investigation into the Foundation and Microfinance bank funding continues.

In view of these revelations, we sought out the Oyo State Coordinator for the Goodluck Jonathan Presidential campaign, Oloye Olajumoke Akinjide to ask about the source of the millions in dollars she allegedly doled out to leading opposition governorship candidates and other political bigwigs across Oyo State to mobilize their supporters towards voting Goodluck Jonathan in the last presidential poll.

But in an apparent bitter reaction to the ongoing $2.1billion arms procurement probe, and our question on whether the money she disbursed for the Jonathan campaign in Oyo State was from the Sambo Dasuki slush fund, Oloye Akinjide declared the present times to be a period of witch-hunting in Nigeria. Said Akinjide, “do you really think I will answer that? This is clearly a period of witch-hunting in the country and I have no further comments to make”, she retorted. All further attempts to get her to respond to other questions about how much she received, how it was disbursed and on her tenure at the FCT Ministry yielded no result as she bluntly refused to answer the questions sent to her phone via whatsapp.

With the EFCC and Dasukigate’s special panel extending their probe activities to other beneficiaries of the Sambo Dasuki largesse, coupled with the voluntary admissions of many who received money even before the EFCC beamed their searchlights on them, the honorable path for the former Honorable Minister of State for the FCT, Oloye Jumoke Akinjide (Jummy, as she is fondly called by admirers), is to clear the air on whether the source of the money she received for the Jonathan campaign in Oyo State was from former NSA Sambo Dasuki, how much was received and how it was disbursed; as well as on other sundry allegations for history to be subtle on her.