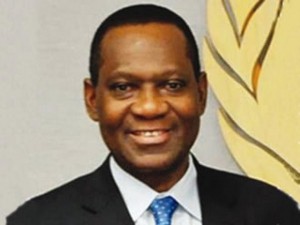 It is generally believed that the families of those holding political appointments enjoy the wealth of Nigeria most. This belief was reinforced when the House of Representatives Foreign Affairs committee headed by Nnena Elendu-Ukejeon weeks back received delegates of the Foreign Affairs Ministry who were present to defend their budget for the year before the committee.

The House of Representatives committee was shocked at the huge bill the foreign affairs ministry presented as spent only for the previous year. The lawmakers frowned at the way the ministry has been presenting such fees and other expenditures, which they claimed is always done in bulk without names and details of beneficiaries, which allows officials to later adjust the approved figures as they like and spend independently.

Elendu-Ukeje, while explaining the committee’s displeasure with the way things are being done in the ministry to the Minister, Olugbenga Ashiru, accused him of putting votes under four different sub-heads, which he stated is not acceptable to the House.

Though the ministry proposed to spend a lower amount of N5.2 million for the same purpose this year, the committee believes the figure will be raised after appropriation. The amount is aimed to foot the fees of children of ambassadors and other diplomatic staff in about 200 missions runs by Nigeria across the world.

Despite all said, the legislators have not indicated any plan to block the proposals or to order a discontinuation of the hefty amount the government pays yearly on the fees of diplomats’ wards.

The committee also raised questions on the ministry’s security vote for 2012, is a little below N2 billion while it plans to spend N2 billion on transport and travels. But the minister, in his response stated: “We travel to get the best, and we need to get well-trained diplomats.” Saying that without training it will be difficult to get good diplomats, he added: “Without training, there will be no results. We send some of them to Oxford, some to Italy as they will be competing with the best from the world.”

The House also condemned the huge amount Nigeria spent on funding to the United Nations, African Union and ECOWAS last year, which it called “ridiculous”.

The minister explained that the country contributed N300 million to the United Nations, N3.3 billion Naira to the African Union and N285 million to the Commonwealth.