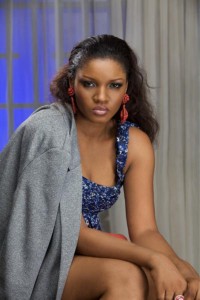 This is a story that may unsettle a lot of movie buffs especially those who see ravishingly beautiful Omotola Jalade-Ekeinde as their screen idol and role model. This is because when the name Omotola or Omosexy as her fans like to call her, is mentioned, the picture that readily comes to mind is that of a responsible wife, mother, entertainer, humanitarian and philanthropist. Omotola, however, had recently made known her intention to act nude to the surprise of many of her fans worldwide.

She made this known through an interview she granted one of the dailies in Nigeria recently. When she was asked if she had ever acted nude or would ever act nude, Omotola who has just gone international with the inclusion of her name in Time Magazine’s 100 Most Influential People in the World alongside world leaders like President Barrack Obama of the United States and international showbiz stars like Jay Z, had this to say: ‘Not yet, but if the circumstances are right, maybe I will consider it. Never say never.’

Omotola, who is signed to Bungalo Universal in United States of America and whose song, Barren Land has been adopted by Amnesty International as a theme song for one of their campaigns and has wormed her ways into the hearts of millions of people across the world with her good roles interpretation will definitely generate a lot of controversies with her recent revelation because acting nude is seen as an indecent act especially in a country like Nigeria where she hails from and represents at the United Nations as an ambassador.

But frankly speaking, while some people may be of the opinion that she had simply played to the gallery by making such a statement, others may simply see what she intends doing as purely professional. At least for now, nobody can categorically state what circumstances that would lead to her acting nude are going to be, only Omotola herself can explain. But on our own side, we can only have our fingers crossed and see if she is actually ready to step up her career ‘professionally’ by acting nude or if her husband, Captain Matthew Ekeinde would stop her from taking such a step.