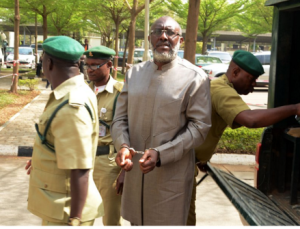 The recent incarceration of PDP spokesman Olisa Metuh didn’t come to many as a big deal reason that before now many has pointed accusing fingers at the man who is in charge of laundering the image of the largest party in Africa over his insatiable appetite for money.

Shortly after the campaign news filtered in to the public about the fraudulent ways some PDP leaders and topnotch members spent campaign funds meant for the realization of the second term dream of President Goodluck Jonathan. In some act that looks and sounds like a puzzle, the party reported that a whopping N2 trillion was missing in its financial confines, no thanks to the flamboyant manner some ‘reliable’ party leaders are spending the funds.

Global News gathered that, in order to ensure that Jonathan returns to power, billions of naira were being given out to those who were perceived to be important and vital for GEJ’s victory. We also have it exclusively that majority of those entrusted with the distribution of these funds were mere criminals and greedy people who only lodged the monies into their personal accounts at the expense of the president’s aim. Also, information at our disposal has it that some of these people went to former President Jonathan, promised him enormous votes and also assured him that their people would give him their full support. The president, we gathered, took their promises hook, line and sinker and then gave them money to execute their promises, but these greedy politicians would turn their back on the former president and use the money for their own personal use.

However, this gist is not about the huge amount of money spent by the parties, it is about one of PDP chieftains and indeed the spokesman of the PDP, Olisa Metuh. The introvert spokesman is in the news for many of his fraudulent activities during the election money saga. He is said to have collected millions of naira in the nine figures region and lavished them on God knows what. Metuh allegedly used his position as the PDP spokesman to collect huge amounts of money from aspirants into various political posts. He is known to wield so much influence in the Presidency that those who fell victim of his antics never doubted his ability to ensure they got their desired aims. It could also be recalled that Ndidi Elumelu, a former House of Representatives member gave one of the PDP chieftains a whopping N500 million to appease all PDP leaders in Delta State in order for him to clinch the gubernatorial ticket of the state. But, alas, the money was nowhere to be found as the collector suddenly siphoned the money. Till date, President Jonathan is still wondering how he lost his second term bid, but Nigerians would now know that it was because of the greediness of his so-called party leaders who never wanted go. This is how the story was reported then by Global News after the election.

However to buttress our story early last year Metuh the thrift collector is in trouble with the Federal government for allegedly collecting N400m from Dasuki from the money meant to purchase arms for the armed forces in the quest to rout the deadly Boko-haram sect.

The revelation by Metuh, according to EFCC officials, prompted the agency to beam its searchlight on cash payments from the ONSA, leading to the discovery that he was one of the major beneficiaries of slush funds, now a subject of investigation and prosecution by the Federal Government.

It was learnt that out of the $2.1 billion arms funds, N400 million was transferred from ONSA to Destra,the company linked to him on November 24, 2014 which previously had a balance of N6, 676,576.06 only before the major transfer from the ONSA.

A top source in the EFCC said that Metuh was also receiving a monthly pay of N4 million from ONSA. Those who know Metuh claimed that he loves and worship money and this may have accounted for his refusal not to cooperate with the EFCC officials.

Meanwhile the Economic and Financial Crimes Commission (EFCC), on Thursday, filed a seven-count charge against the National Publicity Secretary of the Peoples Democratic Party (PDP), Olisa Metuh. The charge, which was filed before a Federal High Court in Abuja, has, however, not been assigned to any judge. Meanwhile, the PDP spokesman has filed a suit for the enforcement of his fundamental right, asking the court to order his release from the custody of the EFCC. EFCC, through its counsel, Rotimi Jacobs (SAN), told Justice Okon Abang that the anti-graft agency has a valid order of the court to detain Metuh.