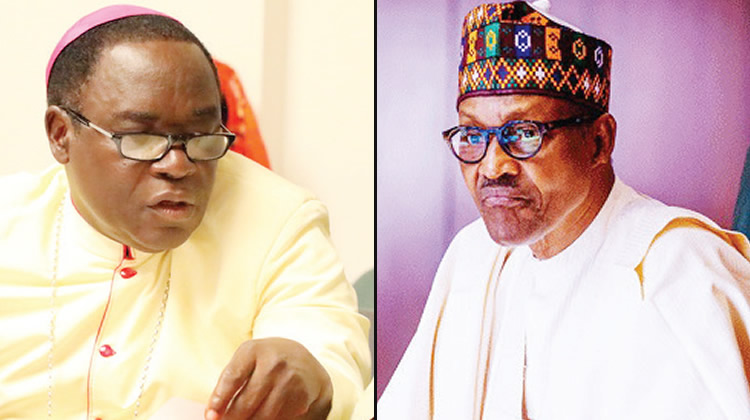 The bishop also said Nigeria appeared to be heading for darkness under Buhari’s regime, noting that the government must explain the mystery behind the endless bloodletting in the country occasioned by insecurity.

He described Nigeria as a rudderless country where the citizens travelled in a boat devoid of captain or crew and without any maps and destination in sight.

Kukah said these on Friday in his Christmas message titled, ‘A Nation in Search of Vindication.’

The bishop said, “This government owes the nation an explanation as to where it is headed as we seem to journey into darkness. The spilling of  blood must be related to a more sinister plot that is beyond our comprehension. Are we going to remain hogtied by these evil men or are they gradually becoming part of a larger plot to seal the fate of our country?

“President Buhari deliberately sacrificed the dreams of those who voted for him for what seemed like a programme to stratify and institutionalise northern hegemony by reducing others in public life to second-class status. He has pursued this self-defeating and alienating policy at the expense of greater national cohesion.

“Every honest Nigerian knows that there is no way any non-northern Muslim President could have done a fraction of what President Buhari has done by his nepotism and got away with it. There would have been a military coup a long time ago or we would have been at war. The President may have concluded that Christians will do nothing and will live with these actions.”

Kukah maintained that Buhari’s alleged nepotism and commitment to reinforcing the foundations of northern hegemony had dire implications as prominent northerners with a conscience had raised the red flag, pointing out the consequences of his nepotism on national cohesion and trust.

He said against the backdrop of Nigeria’s endless woes, the country had become a nation embroiled in desolation with the prospects of a failed state staring the citizens in the face.

He, however, urged Nigerians not to give up despite the pain, sorrow and uncertainty in the land, enjoining them to pray to God to save the nation.

He added, “Yes, our dreams have been aborted. Yes, our commonwealth has been stolen. Yes, our cancer of corruption has metastasised. Yes, we have been guilty of patricide, fratricide and attempted even suicide. Yes, we are hungry, angry, thirsty and starving.

“Yet, we stand firmly with the unshaken belief that no matter the temptations, the world has known worst times. These may be the worst of times, but for men and women of faith, they could be the best of times. We must stand firm and resolute because, our redeemer liveth (Job 19:25).”

The bishop pointed out that the recent abduction of Kankara schoolboys in Katsina coupled with the kidnapping of schoolgirls in Chibok, Borno State and Dapchi, in Yobe State, had further revealed the dangers children are exposed to in the northern part of the country.

He added, “The Almajiri is the poster child of the horrible and inhuman conditions of the northern child. It is a best-kept secret that the region refuses to confront but it has now exposed its underbelly. Now, what (is the) next for the children of the North?

“We thank God that the children (Kankara schoolboys) have been returned safely. This is the easy part. The challenge now is how to deal with the scars inflicted by a derelict nation which is still unable or unwilling to protect its citizens. Yes, we commend the federal and state governments for the rescue operation.

“The larger issues now are whether the federal government understands the evil web of intrigues into which Boko Haram has tied it. Will the Federal Government continue to reward and fund Boko Haram by playing its game? How long can this circle of deceit last for, given that every kidnap merely strengthens their arsenal?”

The Senior Special Assistant to the President on Media and Publicity, Garba Shehu, did not take his calls Friday evening when Saturday PUNCH attempted to get his reaction to Kukah’s message.

He had yet to respond to a message sent to him on the matter as of the time of filing this report.