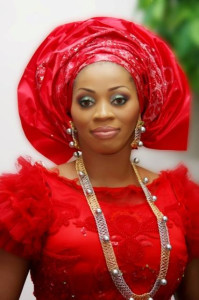 Sade! Sade! Sade! Long reign Queen Sade Okoya 1. May her Imperial Majesty reign oooooo! The Okoyas are always throwing one party or the other; in fact, they glamourised aso-ebi with the 60th birthday celebration of the authentic matriarch of the Okoya household, Alhaja Kuburat Okoya in September 2002. Then the whole of Lagos would troop to their Lekki Castle thereby causing huge traffic on that route. But these days, they have become more strategic and classy with their parties. Gone are the days of all comers affair. On Easter Sunday, the 20th of April, 2014, the Okoyas once again played host to the A-listers of Lagos social establishment. It was the wedding ceremony of ex-governor Akala’s son and Hadiza Okoya, the UK-trained daughter of Alhaji Rasaq Okoya. The marriage ceremony was indeed super fabulous and had the trappings and hallmark of balling at Style Avenue.

Because the Akalas knew quite well that the Okoyas are a seriously glamourised family, they decided to not only up their game but to match their legendary party loving in-laws, diamond for diamond, cash for cash. As ex-governor Akala and his two wives arrived for the traditional bowing before their in-laws, everyone knew that the Akalas understood the terrain very well. They came in with top politicians from the Southwest and made very good impressions of themselves. But it was what the two wives of Akala had on their necks that had most society women speechless. They were huge intricately crafted diamond necklaces that could restore the sight of a blind man with its lustre and glitz. They were a spectacle to behold and had huge cocktail rings on their fingers. Their wristwatches were diamonds all through. But even with all that preparations and their once-in-a-lifetime look, they couldn’t snatch the crown from the goddess of bling herself. Sade Okoya proved that day; that as far as wearing dramatic diamond is concerned in this country, her replacement is yet unborn. What she had on her neck was, to put it mildly, mind-blowing.

Top society women posit that it could never have been an on-the-shelf jewelry but rather hours of handcrafting by a reputable jeweler. Her bangles and rings were the size of an ‘aircraft’.She was all over the place with her personal assistant, oh sorry her best friend Mrs. Oguntade. As she changed the second time for the reception party it was pretty obvious that her destiny lies on the Bling Boulevard. Even with all the dignitaries present, Sunny Ade focused his praise singing on Sade Okoya. In fact, for over one hour, it was only Sade that Sunny Ade praised consistently as everyone sat and watched. The party had all the ‘powerful women’ like Hajia Abba Folawiyo, Senator Florence Ita-Giwa, Yewande Onileere whose daughter should have been Kola Abiola’s first wife, but the wedding was cancelled by Simbiat Abiola because she felt betrayed by Yewande! Sade Balogun, Olori Adetutu Balogun wife of Subomi Balogun, Opral Benson who is known for her notoriety in the white powder business; they were all there in full attendance. But having said all these, we are just about to delve into the main story. According to most society ladies who spoke to us on condition of anonymity, this was the part where Sade Okoya not only gets ‘coroneted’ as the Queen of Lagos social establishment, but also ensured that she made every known society matron bow before her throne as she sashayed up and down the lavishly decorated hall, most society women did not know that Sade’s ‘coronation’ was about to take place. At some point, Sade was seen giving instructions to the king of world beats, King Sunny Ade and not long after, Sunny halted music and announced to the shock of most people present that the ‘Royal Highness’ Queen Sade Okoya was coming to dance.

That the new queen of the terrain, the once-upon-a-time Ojuelegba girl was coming to dance. Ordinarily, this should be a dance for the bride’s mother, the matriarch Alhaja Kuburat Okoya but for the ever strategic Sade who also doubles as the managing director of Eleganza City, that was the much sought after day and nothing would stop it. If you think the surprises were over, then wait for the killer. As she made her way to Sunny Ade’s stage, the most revered names in the social circle escorted her and were spraying her with bundles of money. But surprisingly, Sade who is very tall for a lady did not dance but instead smiled at them with condescending looks. It was the type of smile that you give to your boss at the office when you eventually get promoted over him.

Like school girls around their class prefect, these women sprayed Sade endlessly and yet she never really danced but looked over them. Not done with humiliating them, she delegated some very derogatory jobs that should have been for domestic servants to these women who have obviously lost the plot. Aladura prophetess and prayer warrior/socialite, Joko was responsible for picking and collecting all the money sprayed Sade. As Joko Oni bent to pick these monies, people began to wonder how a girl who is of no meaningful pedigree by birth was able to arrive at this level. According to a top fabric merchant who spoke with us immediately after the party, “It is a pitiful sight, Sade ti fi ori won gbale”. This respected business woman said the likes of Abba Folawiyo, Ita Giwa, Yewande Onileere, Olori Adetutu Balogun and the rest of them were “too big to be used in this manner.” It was a day that most society women will not forget in a hurry. Sade’s stock in trade is to give certain high-profile women her expensive aso-ebi free of charge. Truth be told, most of these insanely rich women are so tight with funds that they would do anything for freebies. Over a long period of time, Sade who is very good at forming ‘respect’ has not only won them to her side but they practically ‘worship’ her.