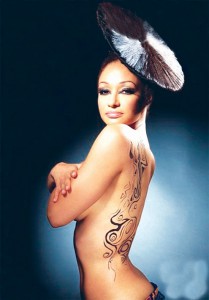 Her name is mentioned with smiles by many society women she had at one time or the other worked on. Modupe Ozolua, the pretty mother of one, is a leading cosmetologist inNigeria. She opened her talk of the town beauty spa a couple of years back amid fanfare. She can boast of many of the society bigwigs as her customers.

Current information has it that the beauty queen is disposing of her beauty spa situated in Lekki,Lagos. Not only that, she is putting it up for sale. She is also said to have disposed of everything inside, from computer to furniture, air conditioner and other machines she was using for the business.

Though many can’t say what’s actually the problem with her, some people claim that her decision to sell off the property is because she’s flat broke; some say it’s because of her new found faith as she has recently become born-again. She’s now a strong member of theMountainofFireand Miracle Ministries popularly called MFM and she has decided to shun the old, weird lifestyle she was known for while still in the world and now clings to Jesus alone. Edo-born Ozolua who was known for her bare-it-all style, would not hesitate to expose her cleavage, and sometimes her boobs.

Ozolua was known for her controversial lifestyle and her blunt attitude as she doesn’t lie about her weirdness. She had once admitted publicly that she had breast enlargement surgery many years ago. She was also at a time accused of practising lesbianism.

Now born-again Modupe recently said she has abstained from sex for more than two years, which many would find difficult to believe as her detractors believed if she did not have it with a man it must have been with a woman.