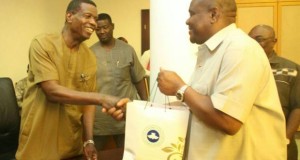 Over the years,the general Overseer of the Redeemed Christian Church of God,Pastor E.A Adeboye has arguably attained a cult status amongst his peers in Nigeria and in Christendom all over the world.This is not only as the result of the efficacy of his prayers for his teeming followers,but also because of the many miracles God has used him to perform.

And to further cement his status as the quintessential miracle performer of note,daddy G.O as he is fondly called as pulled another one – a big one at that.

Just lask week,the man of God,who breezed into the Rivers State Capital for a powerful crusade of the RCCG took time to visit the embattled Governor of the State,Nysom Wike who was fighting to retain his seat as the governor of the oil-rich State.With the judgement due to be delivered days away,Global News reliably gathered that as soon as Pastor Adeboye entered his office,Wike immediately knelt down and asked the man of God to pray for him ”as i need a miracle to be able to win this case”.

The man of God we gathered just smiled in his usual manner and told Gov. Wike that ”it is well,my daddy is in control”.He then prayed for the visibly shaken Governor,invoked blessings on him and asked for God’s mercy to rest mightily on him.After this prayer session in front of his aides and some of his cabinet members,both Pastor Adeboye and Governor Wike entered the inner chambers for another closed door session which lasted for about fifteen minutes.Sources say the Governor was beaming with smiles as they were coming out of the chambers.

Adeboye made it clear that “whatever little problem that is still there in the state, God will make peace to reign”.

Fast forward to Tuesday the 27th of January,the d-day of the judgement of the impending case instituted by the candidate of the APC in the 2015 gubernatoral election in Rivers State against Government Nysom Wike who contested the election on the platform of the PDP.Mr.Dakuku Peterside had accused Gov. Wike of massive rigging amongst other election malpractices.We would recall that Wike had earlier lost at both the election tribunal and the appellate court and his chances was so slim that some political pundits posited that it would take a miracle for him to win at the Supreme court owing to the fact that the APC gubernatoral candidate that is trying to unseat him has the support of the APC-led government at the centre.Moreover,the no-nonsense President Muhammadu Buhari would naturally want to see to it that ”justice is done” at all cost because of the vast revenue accruable to the country from the State.

Now,all seated ,there was palpable tension inside the courtroom as Justice Kudirat Kekere-Ekun,was about to read the judgement in the suit.In a nutshell,it took the judge just twenty-five minutes to dismiss the case for no just cause(well,miracle) and ruled that Governor Wike is indeed the substantive Governor of Rivers State and should continue to serve the people of the State till 2019.UNBELIEVABLE! Governor Wike miraculously won against all the odds.He found favour with God and the Judge to the chagrin of Mr Dakuku Peterside and the All Progressive Congress party.

It must be said that the highly elated Wike was seen in his best mood ever and he took the celebrations into overdrive at the GRA Port-Harcourt Government House.

A source also revealed that as soon as the judgement was delivered,Gov Wike immediately called Pastor E.A Adeboye to thank him for his prayers and blessings.Well,what we do not know is what Wike sent to the Redemption camp as his thanksgiving offering.