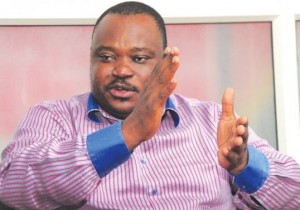 His emergence into the Nigerian business scene still remains a mystery to many even up till now, Jimoh Ibrahim, the self-acclaimed African Donald Trump is an issue that defies everybody; he was at a time the most sought after Nigerian businessman as many envied his commando-like scheme of operations. He moved out from nowhere to acquire ailing companies that he promises to take from their state of comatose to the dream land, laying out plans that will make anybody cringe to do his bidding.

Recently the Ondo State-born lawyer-turned businessman’s appearance at Living Faith Tabernacle also known as Winners’ Chapel Sanctuary popularly called Cannanland along Idi Iroko Road, Ogun State, every Sunday is becoming common, and the first thing that came to mind when he was first sighted was whether the Ankara-wearing CEO has given his life to Christ, but a look into his life shows he actually needs all the prayers he can to get out of the financial mess he found himself which also confirms the reason he has been sighted many times also in the Redeemed Church’s Redemption Camp.

The Undertaker, as many now call him, is known for his many failed businesses, which bring into question his story on how he started making money. Jimoh has under his belt a list of many failed businesses and observers are still counting. Some years back, he acquired EAS Airline, which he allowed to die months into his gaining ownership of the airline on excuse that the board of directors of the airline was not in agreement with him. Another of such businesses he acquired that has since been buried is the VGC Communications Limited. The company was one of the very first companies he bought; it was the company he used as collateral to obtain loan of N1 billion from the defunct Trade Bank. Just like every of his business, VGC Communications has since been shut for reasons best known to him.

Investigation reveals that out of all these companies the only ones still in good working capacity is the Energy Bank in Ghana, and the reason is that he is looking at Ghana as a likely destination if things fail to work here in Nigeria. Experts explained that NICON is never in this state of health even when it is solely run by the government; the apex insurance company it was revealed has for some time now been wallowing in debt over the fact that it is unable to service claims of its clients, whereas the GMD has emptied the company account and even gone as far as using the company property as collateral in the process of obtaining a loan he has not been servicing.

HFP Industries which he re-christened Global Fleet Industries could also not come out of the crisis it was before it was sold to Jimoh Ibrahin and that became one of the companies he has successfully killed for the fun of it. His latest achievement can be said to be a double header; he bought Virgin Nigeria some two years back amid protest from aviation experts who were wary of his interest because of the way he handled EAS and sometime last year he acquired major share in Newswatch Magazine with a promise to pump funds into the company’s daily paper and television ambition. A couple of weeks back he announced to the staffers of the magazine whom he is owing four months’ salary that he would be closing the place down and just recently he announced that the staff of the supposed Nigerian flagship airline are not loyal and that he had to close the company for the next 12 months.

Mr. Ibrahim who is well known for his administrative deficiencies has at various occasions invested heavily in politics. He contested for the office of the governor of Ondo State in 2003 but lost out easily as the people were not fooled by his fake financial status. He was recently disappointed again when after he had invested billions in the People’s Democratic Party (PDP) in the state he was dropped for another, and this will make sure he cannot play politics in the state for the next four years.

Some companies have also had the misfortune of encountering his ‘Midas’ touch that ruins business. Sources claimed that it was his ill-fortune that was responsible for the problem that befell Oceanic Bank, a bank with prospect that has since been swallowed by another, Owena Motels, the flagship hotel of his home state also suffered the same fate through him but for the intervention of the state governor who quickly waded in to the rescue of the hotel.

With the current trend this barrister will need every prayer necessary not to be jailed for diverting the loan collected from the Bank of Industry (BoI) with the intension that it will be used to put some things in order in Air Nigeria which he finally closed days back.