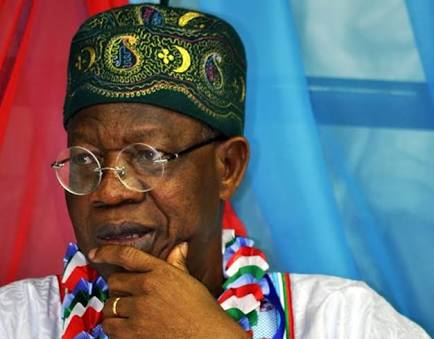 He has so many precedents in the area of smooth propaganda and he could well be referred to as this administration’s spin doctor and the Goebels of the modern day Nigerian politics going by what he has achieved in the area mesmerizing the populace and his opponents with his smooth-talking by constantly calling black another colour for the Nigerian public.

Buhari’s Minister of Information Lai Mohammed is indeed a household name in the country because of the role he played during his days as the Publicity Secretary of the ruling All Progressive Congress because of his vociferous voice against the rank and file of People’s Democractic Party and former President Goodluck Ebele Jonathan.

Lai Mohammed now has a reputation amongst Nigerians because is known has an incorrigible and pathological liar whose mastery of his professional lies is second to none in this political era.The way and manner Lai Mohammed goes about his business as the mouthpiece of the Buhari-led administration could be likened to that of a servant who is paid to do the dirty job of portraying his master in good light by any means necessary including telling “white” lies.

Just recently,he was quoted at a public function when he lamented that Nigerians simply don’t believe him; “People just have a mindset that whatever Lai Mohammed says cannot be true, but nobody has ever come out to say that I said `Y’ and it was `Z’ that happened. But many in the country would recall how Lai Mohammed had in the recent past distorted the truth in favour of the APC-led administration, one of such occasion was when he said Boko Haram had been completely defeated only for the group to launch another deadly attacks that claimed many lives the following day.

However,the National Assembly has launched a scathing attack on the Minister of Information that further exposes his litany of lies by asking him to defend how his Ministry made a paltry income in the last fiscal year(2016).

The smooth-talking Minister was intensely by the Senate last week over poor revenues generated from the culture and entertainment sub-sector. At the budget defence session with the minister and some of his high-ranking officials from the ministry of Information and Culture,the Senate Committee on Culture and Tourism declared that it was quite unfortunate that the ministry presented only N620,000 as total revenue generated in the year 2016.

Global News sources hinted that the Minister was visibly shaken and uncoordinated as he was being grilled because he had no answer for the Committee.Lai Mohammed’s ingenuity at lying could not help him as he was just saying things that were at variance with what he was being asked.We also gathered that the Chairman of the committee became so angry at a point that he accused the Minister of begging the question.