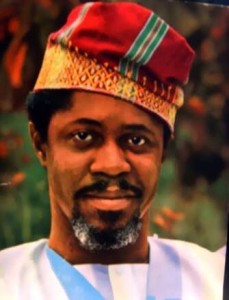 Just like the saying goes,”like father like son”, Femi Fani-Kayode is a chip off the old block when it comes to talking gibberish.It must be said that the trait runs in the family as Femi’s father,chief Remi Fani-Kayode, a vociferous parliamentarian in the first republic was a controversial figure in out of the parliament and was a rabble-rouser par excellence. Fani-power as he’s fondly called rose to prominence in the first republic through his unguarded utterances and his audacity to lend his voice to basically anything in the polity at that time.Chief Remi Fani-Kayode however got more than he bargained for when in the heat of the first military coup of 1966,he was being transported after been nabbed by the then coupists enroute Ibadan to Lagos when he began to utter all sorts of rubbish trying to exonerate himself from the soldiers who arrested him .it was at this juncture that a young military officer seated beside him gave him a dirty slap and told him to keep quiet because he talks too much. The young military officer we gathered was so angry at the way RFK was ranting that he didn’t wait for orders from his superior officers before stopping him from further rants.Asked why he did what he did by his seniors in the car,the junior officer said ”he was just talking non-sense”.Little wonder his son who will never stop courting controversies with his assertions and utterances who is seen in many quarters as a talkative who opens his mouth at will may not be on a bad track after all, as he has taken from his dad stopped and cleverly towing the line of his old boy.