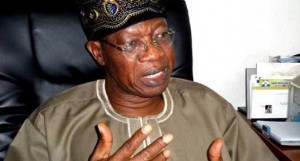 Is Lai Mohammed Really ”Liar” Mohammed, as some of his political opponents claim?

If you believe in failed propaganda, maybe: for recourse to that libel is from the Peoples Democratic Party (PDP) camp, that the minister of Information and Culture helped to uproot, with PDP’s defeat at the 2015 general election.

But if you believe in effective propaganda, that cannot be true. What, for instance, is a ‘lie’ about the changed reality of opposition becoming government; and the former government screeching, like morose children who just lost their favorite lollies?

Well, it is all in the realm of political communication, and the fierce battle, for the public mind, by conflicting political camps.

Political communication has been defined by David L. Swanson and Dan Nimmo as “the strategic use of communication to influence public knowledge, beliefs, and action on political matters.”

The words ‘strategic and purposeful’ here provide the thought process for the complex nature of communication within any given political space.

In the light of the above, I will attempt to x-ray the roles played by Alhaji Lai Mohammed, former spokesman for the ruling party, the All Progressives Congress, whose hard work, resilience and dedication earned him the enviable position of the Minister of Information and Culture in Nigeria.

Clearly, no one was in doubt whether Alhaji Lai Mohammed would emerge as the Minister of Information in Nigeria. If there was any credential required to be nominated as one, he has acquired all-academically and professionally.

Little do some of Mohammed’s detractors know that he practiced public relations for over a decade while working with Nigerian Airports Authority, now Federal Airport Authority of Nigeria (FAAN) as the Public Relations Officer of the organization.

Mohammed, I should say, was well grounded in the media and so it did not come as surprise to some of us that he performed very well in the task of marketing the All Progressives Congress (APC), using various media channels to lead narratives, manage shortfalls and sometimes, propagate with a view of getting results for his political party.

Mohammed did very well as a party man. His party’s activities, coupled with the quality of the Presidential candidate, Muhammadu Buhari, provided a great impetus for this information manager. I remember how hard the Peoples Democratic Party tried to make President Buhari, then a candidate, appear unelectable. It was Lai Mohammed and others in the media and communication team that worked tirelessly to ensure the victory that the APC enjoys today.

It is worrisome to read some write-up, particularly by someone who should understand the subject of discussion but who chooses to ignore facts of the matter and is eventually playing to the gallery, on why President Buhari should fire Lai Mohammed. Nothing more could be laughable than a man who has failed in every area of his personal endeavour attempting to mentor the younger ones on how to run their lives.

I read one or two pieces and without any iota of doubt, I concluded that they must be a hatchet job. The language, the uncoordinated thought and lack of facts as presented by these writers made it clear that they or their principals are clearly not comfortable with the role that the Minister of Information is performing with regard to the fight against corruption.

It is pertinent to ask, why should Buhari fire Mohammed? One of the writers says the Minister is no longer believable. He cites commentaries on the social media platform, where some described the Minister as Liar Mohammed.

May we remind the writer that it did not start today! The labelling of Mohammed was made popular by the PDP, at the twilight of President Jonathan’s administration. This is because, at the time, the PDP did not have a solution to the barrage of political attacks unleashed on them on a daily basis by Alhaji Lai Mohammed, especially on the level of corruption and heist perpetrated by the Jonathan administration and the PDP. The only answer they found convenient at the time was that Mohammed was a liar. But today, millions of Nigerians know who was the lie, and who was the real deal.

There are two, most significant issues in Nigeria today. They are corruption and insurgency. Mohammed has successfully pushed the issue of insurgency to the back pages of newspapers and has played up the need to have a corruption-free society.

Is it a lie now that Boko Haram has been thoroughly degraded? No, it is not, if you ask me. When last did you read on the front page of any newspapers, the usual screaming headlines about Boko Haram’s nefarious activities that characterized the Goodluck Jonathan administration?

No country in the world has been able to completely win the war against insurgency. Not even the United States of America has been able to defeat the dreaded Islamic States (ISIS). But the Nigerian Army has been able to reduce the activities of Boko Haram to suicide bombings, hitting soft targets only.

We can safely say that Lai Mohammed was right when he said that the Nigerian Army had technically defeated Boko Haram.

Except one is being mischievous, or one was benefitting directly or indirectly from the Boko Haram insurgency, it is safe to agree that the group was defeated by the Nigerian Army before the deadline set for them by President Muhammadu Buhari.

Managing information in a complex political situation or atmosphere like Nigeria where corruption has become second nature within the political class, and mischief is never in short supply, can be a daunting task.