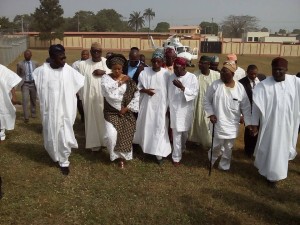 There is something suspect about the All Progressives Congress (APC)’s mantra of ‘Change.’ It brings to mind the practiced trickery and sleight of mind of the impenitent con-artist. Now that the elections have been lost and won, the APC manifests as an aberration of the ‘Change’ it promised us. Or how do you make sense of Governor Akinwumi Ambode’s decision to release one of Lagos State’s newly acquired security surveillance helicopters for APC leaders, Bola Tinubu and Bisi Akande’s private pleasure trips. Not a few people were embarrassed to see the former Lagos and Osun state governors arrive at the coronation of the new Ooni of Ife, Enitan Ogunwusi, in Ile-Ife yesterday, in one of Lagos’ surveillance helicopters.

Predictably, the travesty has generated outrage on the social media as citizen journalists and concerned citizenry take Governor Ambode and his godfather to the cleaners, lamenting that while daredevil armed robbers unleashed death and mayhem on various parts of Lagos, Ambode and his godfather are busy playing Russian Roulette with the people’s safety and fate.
Were the helicopters acquired by Governor Ambode to serve as a pleasure ride for APC chieftains or as part of Lagos State’s crime-fighting apparatuses? How could the incumbent Lagos governor flagrantly divert a security apparatus acquired at prohibitive price for the private use of his political godfathers? He was certainly not bullied to do so, so argued sources in the Lagos State Government House; according to the latter, the governor was only too eager, obsequious to be precise, to curry the favour of the man who facilitated his ascension to the coastal state’s must exalted political office. But while Governor Ambode, Tinubu, Akande and company persist in their charade, let them not forget the promises of ‘Change’ they made to poor, unsuspecting electorate at election time.