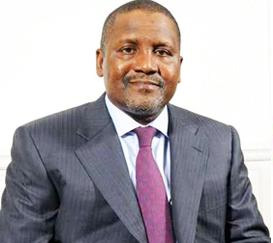 The Federal Government has accused Africa’s richest man, Aliko Dangote of making frantic efforts to frustrate his competitors in the cement manufacturing industry in Nigeria out of business.

The government, in a counter-affidavit to a suit filed by Dangote before the Federal High Court in Lagos, accused the business mogul of indulging in anti-competition act designed to control the entire cement industry and leave Nigerians at the mercy of his price whims and caprices.

Dangote, through his company, Dangote Cement Limited, had sued the Federal Government over a waiver granted to one of his major competitors in the cement manufacturing industry, Ibeto Cement Company.

He had specifically sought an order of revocation of the said waiver to Ibeto together with an order compelling Ibeto and its subsidiaries to pay to the Federal Government some unpaid import duties estimated at billions of naira.

Dangote had, in the suit named Ibeto and its subsidiaries (IBG Investment Limited, Derima Ventures Ltd), Federal Republic of Nigeria, Attorney General of the Federation, Federal Ministry of Finance, Federal Ministry of Trade and Investment, Board of Customs and Excise, Federal Inland Revenue Service (FIRS) and Nigerian Ports Authority (NPA) as co-defendants.

Dangote had specifically alleged that Ibeto, acting in concert with its subsidiaries, IBG and Derima Ventures, suppressed facts and acted fraudulently in obtaining a consent judgment against the Federal Government in consolidated suits marked FHC/Abj/CS/400/2006 and FHC/Abj/CS/496/2010.

In the consent judgment, the court ordered the government to pay Ibeto about N7.8 billion for the unjustified closure of its plant between 2005 and 2007 and set aside a 2010 Presidential directive raising import duties and abolishing the import waiver granted Ibeto between 2007 and 2017.

By the judgment, Ibeto was to continue paying 5 per cent import duty till 2017.

But Dangote is accusing Ibeto and other defendants in the suit of colluding with each other to confer an advantage on Ibeto and its subsidiaries, by allegedly being allowed to import bulk cement with only 5 per cent import tax, excluding Value Added Tax (VAT) as against a Presidential directive of July 8, 2010 directing all cement importers to pay 20 per cent import duty and 5 per cent VAT.

Dangote, who claimed in the suit to be the largest investor in cement manufacturing in the country, argued that the non-implementation of the Presidential directive of 2010 and other earlier directives regulating the tax on imported cement, has denied the Federal Government, FIRS and related agencies of their deserved incomes from such importation.

Dangote, in its originating summons, set seven questions for the court’s determination and urged the court to among others, declare that the President lacked the powers to waive or alter the provisions of the VAT Act without the National Assembly.

It also prayed the court to declare that the 2010 Presidential directive constituted a cancellation of the waiver or tax relief granted Ibeto in 2007.

The plaintiff urged the court to order the Federal Government to recover all duties and taxes owed by Ibeto and its subsidiaries, by virtue of the 2010 directive, an order setting aside the consent judgment and an order directing Ibeto, IBG and Deriva to refund the N7.8 billion paid to it by the government by virtue of the judgment.

But the Federal Government, in response, said Dangote’s claims in the suit were “anti-competition and designed to control the entire cement industry and leave Nigerians at the mercy of the plaintiff’s (Dangote’s) price whims and caprices.”

It denied Dangote’s allegation that the consent judgment was obtained fraudulently.

Government also denied that Ibeto suppressed any fact and misled the court into granting the consent judgment.

It argued that since Dangote was not a party in the consolidated suits in which the consent judgment was given, and since it was not directly affected by the judgment, it lacked the right to challenge the judgment.

Government also contended that since Dangote lacked the statutory powers to recover unpaid tax on behalf of the government, it cannot institute cases with the aim of recovering government’s purported unpaid tax.

The suit, which was formerly before Justice Binta Murtala-Nyako, is now set to start afresh on April 23, 2014 before Justice Rita Ofili-Ajumogobia. The development followed Murtala-Nyako’s transfer out of the Lagos division of the Federal High Court.