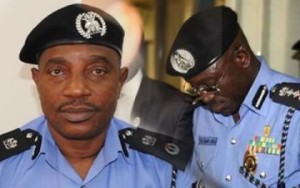 President Goodluck Jonathan on Tuesday sacked the Inspector-General of Police, Mr. Suleiman Abba, less that nine months after his appointment on July 31, 2014.

The President has named a Deputy Inspector-General of Police, Mr. Solomon Arase, as the acting IGP.

Abba, who was the AIG Zone 7 before his appointment as the IG, succeeded Mohammed Abubakar, who retired after 35 years in service last year.

No reason was given for the sacking.