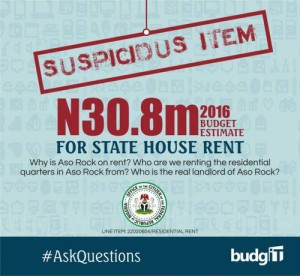 On Tuesday December 22, 2015, President Muhammadu Buhari walked into a joint session of the National Assembly and presented the first annual budget proposal of his administration, ambitiously tagged: “The Budget of Change”.

After highlighting the economic challenges that confronted the country due to the fall in oil prices, the president vowed the budget would cut waste from government spending and its funds would only be used for public good.

“We are determined to ensure that our resources are managed prudently and utilized solely for the public good,” Mr. Buhari said. “To set the proper tone, one of our early decisions was the adoption of a zero based budgeting approach, which ensures that resources are aligned with government’s priorities and allocated efficiently.”

The breakdown of the line items of the 2016 Appropriation Bill, however, shows that what the president said cannot be farther from the truth.

PREMIUM TIMES extensive review of the proposed budget, which has passed second reading at the Senate and the House of Representatives, reveals it is a collection of fraudulent and frivolous allocations, many of which are clearly meant to support the opulent lifestyle of public officials.

Many of the allocations were either repeated several times, over-priced or are obvious misplacement of priorities.

A particularly disturbing instance of misplaced priority is the allocation for books for Vice President Osinbajo’s office.

Mr. Osinbajo’s office has more money allocated to it for books than what each of the federal polytechnics in the country are getting for the same purpose.

While N4,906,822 was proposed to be spent on books by Mr Osinbajo, the total allocation for books for 11 out of 22 federal polytechnics, which actually have book allocations, was a mere N3,832,038.

In fact, of all government-owned educational institutions across all levels, only two got more allocations for books than what was proposed for the Vice President. The institutions are Federal University of Technology, Owerri, N6,886,157; and the National Open University of Nigeria, N6,466,895.

The need for this huge book allocation for the vice president’s office is even more baffling considering the fact that last year, N7,525,135 was also budgeted for the same purpose.

Although a top source in the Presidency accused senior civil servants, whom he described as “budget mafia”, of sneaking frivolous items into the budget, it is however curious that some of the most outrageous proposals in the budget were found under line items for the State House.

The State House Clinic, its billions and a VIP wing

Of the N3,890,629,221 the Presidency earmarked to spend on the State House Medical Centre, N308million will go for constructing a new VIP wing at the clinic.

Despite allocating N3.21 billion for health equipment and supplies for the State House Medical Centre, a separate line item under “State House HQTRS” lists a N203,273,602 budget for drugs and medical supplies and the vice president was also allotted an additional N7.54 million for medical expenses.

In comparison to the State House Medical Centre’s N3.8billion allocation, only N2,666,853,303 was proposed in the budget for the construction of hospitals nationwide.

And in a clear case of misplaced priorities, the budget proposes N11.61 billion for development, construction and staffing of a ‘Logistics Supply Chain’ for the National Primary Health Care Development Agency, and nothing for its core mandate such as improving access to basic health services. The cables, the lightings and the billions.

Curiously, the presidency also proposed to spend N322,421,971 to link a cable to the drivers’ restroom at the presidential villa. Another N213,873,953 was proposed for linking of a cable from Guest House No 9 generator house to the gate.

Repairs and renovations of existing structures are also obvious money guzzlers in the proposed budget.

Buhari’s Guest House and the N400million face-lift
The general renovation of Aso Rock Guest House was proposed to cost N387,980,200, just as furnishing the rooms in the Guest House was put at N45million. We are not told when the existing furniture in the facility was procured and why there is need to change them now.

Furthermore, a whopping N3.91 billion was earmarked for the annual routine maintenance of villa facilities. A breakdown of this amount shows that the government plans to spend N10.72 million daily on routine maintenance. This amount was exclusive of the N278,041,172 proposed for villa office and residential maintenance. Buhari wants to pay rent for Aso Rock?

Perhaps the most bizarre of all the allocations is the proposed N22,321,880 budgeted for residential rent at the State House. It is unclear whom the presidency is paying the rent to.

In the draft budget, a total of N436,054,626 was allocated for meals and refreshment, canteen/kitchen equipment, foodstuff and catering materials for the president and the vice president.

The Presidency also proposed to spend N904,015,000 for the acquisition of brand new automobile fleet and fleet maintenance equipment in the year.

This amount, when broken down, is equal to spending N2,469,986 everyday on its automobile fleet. This is in addition to the N259,015,000 for the Purchase of “Tyres, Batteries, Fuses, Toolboxes, Car Jacks, Tyre Changing ‘Machines’ and Kits” and N27,000,000 to purchase C-Caution Signs, Fire Extinguishers, Towing Ropes and Booster Cables for just for the Aso Rock automobile fleet.

Curiously enough, most of the vehicles in this fleet are hardly taken outside Abuja and its environs.

The questionable allocations in the draft budget are not limited to the presidency alone. Many more of such bewildering allocations are scattered all over the budget. Buhari wants N1.4billion houseboats for officers while Northeast burns

As our reporters reviewed the budget, it became increasingly clear that the government may have a problem with getting its priorities right.

For Instance, at a time when the nation’s armed forces are battling a murderous insurgency in the country’s North East region – a war that has left many soldiers and officers with horrendous injuries – the Ministry of Defense proposed to spend N1.39 billion for the procurement of a houseboat in Abuja, a floating house mostly used for relaxation and a dwelling place by top officers.

Under this ministry, there was also a particularly arbitrary line item tagged: Procurement of the Equipment and its Accessories. The draft budget did not state what this equipment is and what kind of accessories it requires but a whopping N2.9 billion was projected to be spent on this item.

In comparison, the total allocation for the procurement of computers by the Ministry of Science and Technology is N91,394,900.

The Ministry of Interior budgeted N576,500,000 for the construction/provision of electricity, N595,606,148 for repair/ rehabilitation, and N6.2 billion for research and development.

The Nigerian Prison Service however budgeted N500,000,000 for “capacity building.”

In the 2015 budget, the allocation for security equipment for the Nigerian Immigration Service was N86,057,143 but the figure leapt astronomically to N2.12 billion in the draft 2016 budget.
Repetition galore

The proposed budget for the National Institute for Oil Palm Research (NIFOR) has a repetition of the same line items with different allocations. The agency proposed N15,000,000 for water reticulation in main station and immediately proposed the N5,000,000 for the same item.

Similarly, the Federal College of Fisheries and Marine Technology repeated the allocation for “Construction/Provision of Agricultural Facilities” twice with different figures. The item was first cost for N626,037,709 and then for N50,000,000.

Another curious feature of the draft budget is the allocation of the exact same amount for unrelated items. For instance, the National Library allocated N5,021,254 each for the following items: books, printing of non-security documents, cleaning and fumigation services, cooking gas/fuel cost, transportation equipment fuel cost, refreshment and meal, medical expenses, sporting activities, and direct teaching and laboratory cost.

At the French Language Village in Badagry, N17,897,716 each was proposed for the building of clinic block, construction of a 250 metres perimeter fence, and a female hostel.
Same item, different prices