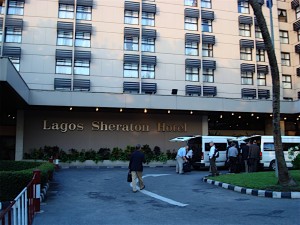 If information at our disposal is anything to go by, then the family of the highly respected business mogul, the late High Chief Alex Ibru may be hatching the plans of putting up for sale the five-star Sheraton Hotels in Ikeja. Feelers from some internal tatafos in the company opined that ever since the demise of the hardworking Chief Ibru and coupled with some family hitches here and there, things have not been that rosy at they used to be.

The hotel, well known for its international standard, has not been living up to standard in recent years and another baffling allegation is that some of the workers are being owed a backlog of salaries. Recall that some months back, there was uproar nationally that the dreaded Boko Haram squad had threatened to attack Lagos and hinted that one of their major targets was the Sheraton Hotels. Since this devilish announcement was made, loyal customers of the hotel allegedly started packing their bags and baggage as there no one wants to die anyhow. So, having lost some of its esteemed customers to the Boko Haram threat and stiff competitions from other industry rivals, the Sheraton is gradually looking like an ‘old school’ hotel.

We also scooped that some other businesses of the Delta-born chief who is from a very influential business and financial dynasty may be going through similar problems and this is the time for his children to put their hearts together and save their father’s legacies. More gist on this development later.