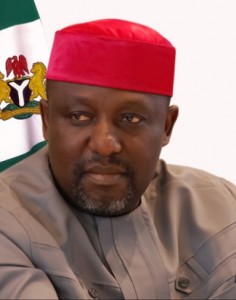 Fela Anikulapo-Kuti had a larger-than-life image and meant different things to different people. He was incessantly brutalized by many governments for supposedly being a deviant. For many, however, one of Fela’s major sources of attraction was the rhythmic, melodious and danceable form of his renditions which made him a constant audience toast wherever he performed or his music was played. Despite coming from a middle class background Fela Anikulapo-Kuti opted for revolutionary political activism and called his un-registered political party, Movement of the People (MOP) an act which seriously underscored the necessity of a conscious mass revolt against a system that puts the wealth of the society in few private pockets. That revolutionary path naturally led him into collision with the ruling classes on so many issues including corruption.

In Imo State today, there is not only a stealing governor, but also a stealing speaker of the House of Assembly, a stealing chief of staff to the governor and indeed a compromised politician in police uniform (Commissioner of Police Ali) which even reminds us that in ‘Overtake Don Overtake Overtake’ (ODOO) Fela had also sung: “Police station don turn to bank, commissioner na managing director.” I could remember the daily chant of “Police-20 -20 naira,” a reference to 20 naira bribe that is always demanded by the police from commercial drivers in Owerri. A commissioner of police that is protecting criminals and murderers in Imo State but is holding a harmless activist and his wife illegally in detention for two months now is bad omen for Imo State as we approach the 2015 elections.

A page 12 advertorial of Nigerian Horn Newspaper of July 9-10, 2014 is an eye-opener tagged “Open Letter to Governor Rochas Okorocha: Hon Citizen Samuelson Iwuoha and Family are Innocent” by De Norsemen Klub (Rc.7458) from Ugochukwu Okere (president) and Emeka Okere (secretary). The Norsemen claimed to be part of a security meeting over the cult killings in Owerri and that they did hand the names of persons that committed the killings at Samuelson’s Street to Imo police command and to Imo government . Yet Mr Ali is still protecting killers and holding an innocent man and his wife in detention all in the name of dealing with the critics in Imo, critics like Kenneth Uwadi. No wonder crime is much in Imo State. Imo has a lame duck compromised politician as Commissioner of Police.

With the combination of Okorocha, Uwajumogu and Imo State CP Mr Abdulmajib Ali , Ndi-Imo ‘don become’ what Fela called ‘Original Suffer Head’. Imagine how they are looting our local government council funds and are telling us all to shut up. I am talking and they are desperate to lock me up and take away my freedom of speech. Plans to lock me up are also borne out of the deep-seated zero tolerance of the government to any opposition to its actions or inactions. Samuelson Iwuoha talked and they are holding him and his wife in detention at the Imo State Police Command, Owerri, since June 3rd, 2014. Okorocha has turned CP Ali into an instrument of repression and intimidation of any opposition to his regime.

We will not be intimidated. Okorocha must stop looting our LGA monies. Take for instance, in Ehime Mbano LGA alone, the sum of N4,725,559,182.63 that came into the council as FG allocation from May 2011 to December 2013 has developed wings. Ehime Mbano is a local government area of Imo State, Nigeria. Its headquarters is in the town of Ehime. It has an area of 169 square km and a population of 130,931 at the 2006 census. The postal code of the area is 472.

Ehime Mbano people have severally cried out against neglect. If you visit the areas mentioned that make up Ehime Mbano you would notice the level of poverty and unemployment in the area. The standard of education in this council area has gone down to an alarming rate, just like amenities such as safe water, good roads, basic health care are non-existent in the area. Yet N4.7 billion came into Ehime Mbano from May 2011 to December 2013 as FG allocation. What happened to the N4.7 billion? The money developed wings. This money would have developed this area a great deal if it was not squandered by Governor Rochas Okorocha. How can Okorocha possibly explain the decision to squander N4.7 billion Ehime Mbano council funds within three years when infrastructure and social services in the council remain collapsed?