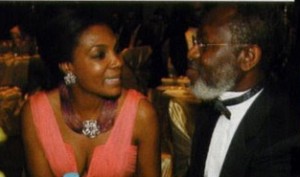 In the late ’90s and even up to the early 2006, Nike Oshinowo used to be the darling of the ‘Paparazzi’ on account of her unrivalled style statement. She was practically the face of every known high-end fashion house. Her style statements were legendary; in fact so prominent was her style that she singlehandedly brought to the consciousness of other fashionable women the fascinating works of super-duper designer Deola Sagoe’s Odua Creations.

So mind-blowing were Deola’s custom-made outfits for Nike that she stole the show party after party and sashayed her way into the super A-list style icons list. She had told a fashion magazine 10 years ago when she graced their cover that she was a Christian Louboutin freak. This was at a time when most Nigerian women hadn’t even heard of the celebrity shoemaker to stars like Victoria Beckham, JLO, Sarah Jessica Parker, etc. Without any visible means of livelihood, this stunning beauty bought couture fashion like pure water.

When she met Dr. Soleye who was a filthy rich spendthrift, she knew she had hit gold. They lived a 5-star lifestyle and the bill was insane. Both in Nigeria and abroad, it had to be grandeur so it wasn’t surprising when Soleye got broke and was almost thrown out of Transcorp Hilton Abuja, a place that had come to be his Abuja home for years. After the death of Stella Obasanjo whom Nike was close to, they plotted their way to the late Yar’Adua’s household via Turai, the indefatigable first lady. By this time Nike was very threatened in the best-dressed list as they were now so many mega rich big girls that couture fashion was now a common language amongst them. So she had stop owning functions, rather she got absorbed into them whenever she arrived at parties. Soleye himself who spent money like it was going out of fashion also needed to regain his financial strength. They got a prominent Nigerian who introduced them to TuraiYar’Adua.

The president was very sick at the time, Nike and Tunde came up with a proposal to the first lady that the fun-loving Dr. Soleye could make available to Mr. President some drugs that would greatly accentuate his health and put him in a better condition. The deal was sealed and the reward for the duo should the president get better was a huge oil deal. \

Gathered that both made a list of urgent luxury needs they would pick up as soon as the president got better, but like a flash in a horror movie, after the late Yar’Adua took the medication things went from bad to worse. In fact he went into a dreadful coma. Turai was mad with them as all Soleye had promised concerning the late president fell flat. They lost face completely at the Villa and in top government circles where they were used to hobnobbing. This incidence was an open secret amongst most society men and women even with the exit of Turai from the state house. And with the arrival of a new first family it would not be long before they successfully hatch a plot that would see them land it big again.The fashionista who loves to visit Senegal for very obvious reasons knows she needs her glory days back.

Had she launched her Asabi fragrance 12 years ago, it would have sold faster than French luxury: Hermes Birkin handbag, but fashion wise she is hardly on top now and debutantes are looking elsewhere for inspiration.