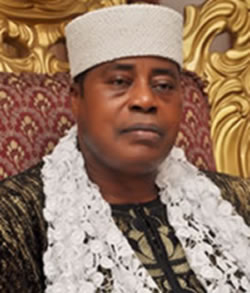 He was at a time the envy of every indigenous businessman in the country because of the perceived business acumen with which he was running his company that brought it from nothing to becoming a major player in the country’s ever-competitive oil industry. His Royal Highness, Obateru Akinruntan, the Olugbo of Ugbo Kingdom in Ondo State, was seen as a great businessman before his ascendancy to the throne in his town years back, as these much can be said about the way he grew his Obat Oil, which was gradually becoming a household name.

It is, however, sad that the once emerging business is gradually falling into ruins simply because of mismanagement by the king of an oil-rich town in Ondo State. The decadence of the company was initially thought to be due to the fact that he is not that much around to see to the running of the place, but recent event shows clearly that the king is at the moment living large to the detriment of the company, an incident that has seen him digging deep into the purse of the company in recent times.

The Olugbo was recently celebrated for dishing out about N40 million on 2014 Bentley coupé and this is happening not too long after he had also splashed on a custom-built 2012 Rolls Royce similar to that of Queen Elizabeth II whose cost is alleged to have been a couple of millions in pounds. Such were his investment on automobile even when there are no good roads where such exotic cars will move freely in his community but his reckless expenditure continues even when his company is suffering neglect as the company is now a shadow of its former self.

It is worthy of note that the billionaire king has turned a nonchalant attitude to the way his company is being run as most of its filling stations are either getting fuels from other companies or are not selling fuel for some time now. A good example is the filling station constructed around the Berger axis of Lagos State; the filling station has gradually turned to the grave of the company tankers as scores of the company’s fuel tankers that have suddenly disappeared from the depots are deposited there. Another of such is a filling station in the Federal Capital Territory (FCT), which has also of recent become a grave of tankers in the FCT, and this is not going down well with those who had been looking up to the company for inspiration.

Though he can still be said to have money he had made before emerging as the king of his town, we were reliably informed that it is only a matter of time before he depletes the company account as he has been falling back on that much more than usual recently. If it would be recollected he was mad at his son to the extent he barred him from their office over the fact that the young man was philandering with company funds whereas it was the father that is doing exactly that with his meaningless purchases of late.