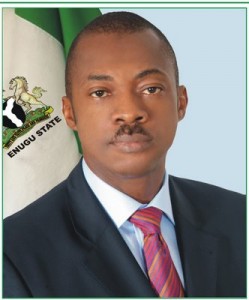 The long absence of Enugu State governor, Sullivan Chime from office has allegedly put the state in a deteriorating state and worst of  conditions, sources have revealed. Reports reaching Global News indicate that since the governor embarked on his annual leave two months ago, the state has suffered setbacks in diverse areas.

According to reports, on September 20, 2012, Gov. Chime handed over the leadership of the state to his deputy, Sunday Onyebuchi, in order to embark on his annual leave. He was said not to have gone on leave since 2007.

But since the deputy took over, indigenes of the state have continued to lament bitterly on its deteriorating condition. There are accusations that nothing is happening in the state to better the lots of the citizens for the past two months. The deputy is said to be lethargic and fun-loving. It is alleged that he is not concerned about the welfare of the state. Many road contractors who had swung to work before the governor embarked on his leave have now stopped working, we heard.

An indigene who spoke with us under anonymity said, “When he (Chime) was around, the roads were at least being worked on and patched in several parts of the state. But since he left nothing is happening.”

It was also revealed by another indigene of the state that the state has not been enjoying water for the past two months as it used to be. “Right now, water has not been running in the whole of Onoh quarters and Onoh Crescent. This has been the case for about six weeks now.

Reports also have it that refuse now litters the state and the acting governor is not bothered to call the attention of the state waste management agency to it. We also gathered from reliable a source that no project is being executed under his administration. With this state of things, many are wondering in wonderment to know if the deputy governor is just a figure head. And in some quarters, some are clamouring for the return of the governor who is said to be enjoying an extended leave. And speculations abound that he is currently in India for medical check-up.