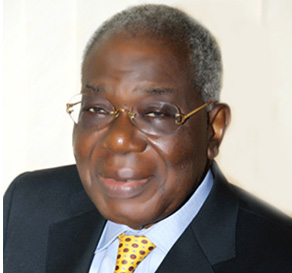 There is a saying that a child not properly trained will plunder the family treasure; it is only God that knows what may actually be going wrong with one of the sons of the head of the defunct Nigerian Interim Government, Chief Ernest Shonekan. The child in question, Adeboye became the CEO of the father’s Nigerian German Chemical (NGC) in 1999 after he had been appointed the company executive vice-chairman in 1998.

At the initial stage when he became the company CEO there seemed to be some progress which people attributed to the assembly of technocrats which then abounded in the company; sources revealed that things however started going from good to bad at the company when the mismanagement character of the CEO started becoming obvious and this and his other bad qualities we gathered started forcing those who were the brain behind his short success stint in the company to start leaving in droves.

Adeboye who is a lawyer by profession we gathered is fond of exerting his authority to the fullest. Popularly known as A.S.(abbreviation of his name), he was said to have forced two of his staff, a guy and a lady who are known to be the heartbeat of the company in their own capacity  out of the company because the lady would not date him but choose to date the guy simply addressed as Mr. Femi.

Because of this, he was said to have frustrated the couple who in turn decided to call it quits and escape abroad to enjoy their life, leaving a vacuum in the administration of their office. It was gathered that it was the attitude of Adeboye who is a director of Unic Insurance and is more involved in Unic Health because of his position in the NGC that forced the organization to fall short of the expectation of the sponsors of Critical Rescue International (CRI). The company which is an emergency response organization sponsored by a telecommunications company was brought into the country by Adeboye-led management with call centers in different parts of the country but when those who hadd been managing the company started leaving due to his management deficiencies, the sponsors were forced to pull the plug.

In an effort to pump life back into the company Adeboye was said to have convinced the company board on the need to approach the Nigerian Stock Exchange in 2008, where it issued by way of rights issue to its existing shareholders, 123 million ordinary shares of 50 kobo each at N18 per share. In his explanation he argued that the company has been making profits the previous years and that it would be of great advantage to the shareholders to increase their share, but that was the last heard about the right issue as shareholders were said to have boycotted the issue.

That was how Adeboye’s mismanagement cost the company some of the best hands. It is even sad to note that his involvement seems to be jinxing the father’s  Unic Health and Unic Insurance as the companies are also struggling seriously in the market While even the once very active website of NGC was last updated years back as names on the company boards of directors are those that have since departed from the company.