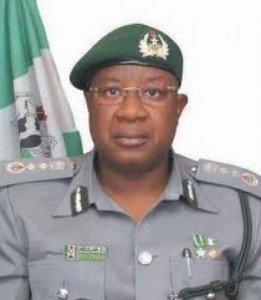 The nefarious acts of many of the country’s uniformed men sometimes make one take the men of the underworld as priests. There have been many cases of excess by these men in uniform that have resulted in the death of many innocent Nigerians. It is on record what they sometimes do to one another; the recent incident between the police and soldiers in the Badagry axis ofLagosis still fresh in our memory and the talk of Badagry brings to mind many atrocities some men of the Uniform commits in their quest to get quick money.

It has come to our notice the activities of one Customs officer who was formerly manning the Gbaji check point along theLagos-BeninRepublicroad somewhere after Badagry inLagosState. The man in question, an assistant comptroller of the Nigerin Customs, has the name U B Yahaya tag on his uniform and he’s said to have formed the habit of seizing goods without taking them to the Customs general warehouse.

He recently seized some goods said to be in the region of N7 million apart from the clearing levy from one, Prince Dapo Adenigbagbe, a Customs Licensed clearing and forwarding agent.

According to Adenigbagbe, it all began on the 1st of March this year when he was returning from Seme in Benin Republic, from where the goods were sent by the agent that freighted it; the goods consisted of 700 pieces of Jeans trousers which were in a bag and 1638 pieces of Polo T-shirt that were in 3 bags.

The agent who said the contents of his bags were dutiable items, claimed that the customs at the first check point searched the goods and after they realised they were not contraband, allowed him to leave, only for Yahaya, who is an Assistant Comptroller of Customs, to stop him few feet away from the check point and ask one of his boys – one Tahiru – to start offloading the bags. After that he put the wears in sacks totalling 14. Yahaya then told him he should pay N50,000 for each sack; the total money demanded from him being N700,000. When he tried to plead with Yahaya, the Customs man declared the goods would be taken to the warehouse in Ikeja. Prince Dapo Adenigbagbe was satisfied as his goods were dutiable goods.

He explained further that his next trip to the place the following morning to confirm when they would be moving his goods to the warehouse, was when he got to realise that a red Ford bus came to move some goods that had been seized by Yahaya before his. They included 150 gallons of vegetable oil, he said. By the time he got there on the fourth day his goods were said to have been moved to the warehouse. He decided to check at the warehouse but was shocked when he was told his goods had not been brought there after he was shown the log book.

He said subsequent effort to get his goods proved futile as the log book showed the goods were never brought to the warehouse. This prompted him to report the case to the police. After that he asked his lawyer to write the Comptroller of the Lagos Federal Unit, and after that the Lagos Comptroller called Yahaya to report to office where Yahaya confirmed seizing his good and that of others which were not reflected in the log book at the warehouse. The comptroller then asked Yahaya to go and sort himself out as he had brought all that on himself.

“I was surprised when after that time the lawyer who had collected money from me to charge the case to court started foot-dragging. This aroused my suspicion that money must have changed hands over the issue as before that, the policemen also revealed to me that Yahaya is a friend to their boss and so they cannot do anything about it. It has been six months since the incident happened and this has forced my clients to start using other agents as they believe I connived with the customs in defrauding them.

“Secondly, though Yahaya has been transferred to Agbara from Gbaji, I’m still afraid for my life to pass through that area because Yahaya used to be a soldier before converting to Customs and he still has his house in Ibereko Baracks where he once suggested we meet before I turned him down as that barracks was where a DPO and DCO were killed sometime ago.

“I was informed that Yahaya is very influential and this was confirmed when nothing was done on the letter I instructed my lawyer to write to the Zone 2. So that has been my dilemma over this issue,” explained Prince Adenigbagbe.

Investigation into the activities of the customs official involved showed that Yahaya is actually a very wealthy property owner. He was discovered to be the proud owner of two Filling Stations close to the border, one house in Festac, one inKano, a hotel inAbuja, two other houses inLagosand some other properties scattered around.

Activities of people like Yahaya have sent many people to their graves as the money used in buying some of the goods seized were through loans. They are also depriving the government of billions which should have been in the government coffers as revenue end up in individual pockets. It is bad that in a country where we are preaching zero tolerance for corruption some corrupt government officials will be treated with kid gloves as people like Yahaya are supposed to be dismissed with all their properties seized rather than being taken from one border post to another.

21 thoughts on “How Customs Officer U.B Yahaya Is Using His Position To Steal People’s Properties”