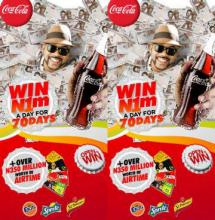 Nigeria is a land of opportunities;  people are struggling day in day out to make a living. While some choose to only walk in the path of righteousness, some others employ crooked ways to go about it. Among those who are getting money through crooked means is the multinational soft drink company Coca-Cola, which recently launched a promo tagged “Open & Win” with which it promised to make 70 people millionaires with a reward of one million naira per day for one person for the duration of 70 days the promo is meant to last.
The promo promises to give out airtime and other prizes, including the N1 million cash, but it turns out that people buy the drink, text the codes found under the crown cork to a short code and win as little as N100 airtime.
Though the people are doing this with utmost excitement to win the goodies promised by the soft drink company, investigations, however, revealed that the whole show may be a charade after all as many are disappointed that after the first time of texting the codes to a short code provided by the Coca-Cola company, all they get in return is an airtime voucher worth N100 that is sent to their phone. And the probability of winning the amount the second time is very slim. It is also to be noted that the money received cannot really be said to be N100 putting into consideration the N10 deducted for the SMS, the money with which they buy the drink, which will leave them with a winning value of about N20.
The bottom-line is that Coca-Cola is ripping off Nigerians! Another thing of concern is the fact that it is doing more harm to the people’s health than good, as the promo sharply increases the sugar intake of the people which exposes them to ailments like diabetes and the likes thereby cutting short the days of so many of the participants all in the name of giving back to the people.