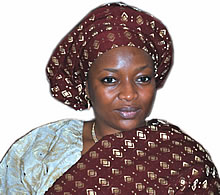 The whole social circle was shaken to its very foundation last week when it was officially announced that the wedding between Aisha,the daughter of former president Ibrahim Badamasi Babangida, and the erstwhile governor of Zamfara State, Alhaji Aliyu Shinkafi contracted about five years ago has been dissolved. Although it is not a new thing to see marriages being dissolved and the affected parties going their different ways peacefully, Aisha’s case is a not-too-palatable one.

Recall that exactly ten years ago, Aisha’s hand was given out in an elaborate wedding by her loving parents to a man called Basheer Nalado Garba. Basheer who was said not to command the kind of social status that befits someone that can marry Aisha, we were told, got the backing of the late General Sani Abacha’s family who supported him with cash and kind to marry Aisha.

The marriage lasted for only three years! The marriage was called off as a result of accusations and counter-accusations of arrogance, lack of submissiveness and overbearing attitude. While people close to Basheer said he had repeatedly complained of Aisha’s arrogance and lack of submissiveness, Aisha’s people said Basheer’s overbearing attitude and greed led to the crash of the young marriage.

Less than two years after leaving Basheer, pretty Aisha found solace in the loving arms of Shinkafi who as at that time had two wives at home already. They got married in 2008 and they started living as man and wife. Shinkafi who insiders alleged married Aisha in a bid to feather his political nest as a result of IBB’s influence, made Aisha the first lady of Zamfara State, an act which caused a serious uproar in his entire household. The other two wives who would have none of that started making the Shinkafi’s household uncomfortable for Aisha.

Unfortunately for Shinkafi, he could not retain the Zamfara State’s number one seat and the hitherto political influence he thought his father-in-law would exert was not forthcoming, obviously because IBB’s political career had crashed since 2007 when he couldn’t secure the ticket to contest for the 2007 presidential election. We were told that before the marriage ended last week, both Shinkafi and Aisha had been accusing each other. While Aisha saw the ex-governor as a gold digger, the ex-governor saw Aisha as a spoilt girl that does not want to be under the control of anybody.

With the present situation, who knows if Aisha would end up in the loving arms of his old-time lover Kola Abiola? At least, those in the know have said it several times that Kola’s heart like his late father MKO is big enough to accommodate Aisha anytime she is ready.