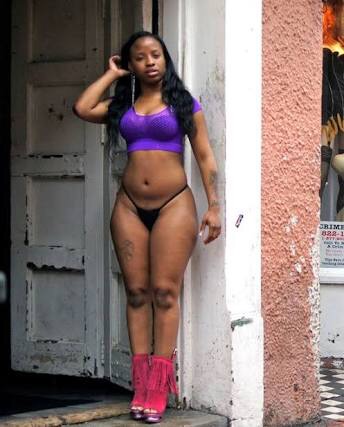 The current wave of harsh economic realities of this Change government which recently hit the church’s offering and tithe’s taking according to many pastors and clerics has now hit the nation’s sex industry. The economic recession has struck the sex market in Lagos and the Paradise City, Calabar, capital of Cross River State, forcing working girls to slash their charges to an all-time low of N400 per insertion and N1, 500 – N2, 000 per night for home service due to diminishing patronage.

The operators of some of the hottest red light districts in Lagos, most especially the professional ones on popular Allen Avenue Ikeja and Ayilara/Empire axis Surulere Lagos are now complaining bitterly of low patronage from night-crawlers and patrons whose purchasing power have been rendered useless by the prevailing harsh economic realities. All the workers (girls) are complaining of “bad market” and many are now willing to even slash their charges further if need be.

At some of the brothels and spots in Lagos Metropolis and Calabar South visited by this reporter, the story was pretty much the same. A street walker, Betty, who spoke to our reporter after much haggle, purchased of a bottle of beer and food for her, said: “I finished my WAEC exam before I joined this runs oo, my father died that same year and my mother’s petty trading is not enough to take care of all of us’. “She also confided in our reporter that she now charges a fraction of what she used to charge about a year ago just because people who come to patronize her do complain of hard times and that they can no longer pay what she used to charge hence the need to adjust her price to suit their pockets.

One popular sex-worker on Ayilara street ,Surulere lamented “Upon say I be Lepa(ultra-slim), the only time i dey get customer well well now is when people get salaries, during festive periods and public holidays”. At a popular nightclub on Oba Akran, Ikeja, one of the call girls accosted our reporter, saying, “Bros come nah,no be N1000 again oo, Buhari don make us bring down the price, port one and get one free. Na change o, we don change o“ she said.

The story of how the economy has taken its toll on the various sectors of the economy including the sex industry is not different in Abuja. Our correspondent who visited the popular Wuse junction, another big red light zone in the country was almost mobbed by the sex workers who started singing ”Buy one get one free, Bogoff Boy”. According to him, the sex worker he talked to did not waste time to tell him ”don’t worry bros, price don come down, If you want till tomorrow, just tell me na only 2k I go collect but you go buy me drink and suya o , but if you want sharp sharp (short time), na N500 I go collect for one round ooo, “ she added.

According to many of them who spoke on the condition of anonymity, the business is fast collapsing as people are no longer coming like they used to. And many of these sex workers are quick to lay the blame on the doorsteps of the harsh economic realities in the land and the fact that the government has withdrawn all the money in circulation. The situation has now forced most of them to cut down on the amount they spend on essentials like toiletries, sanitary towels and even food. Hmm!Times are indeed hard with this Change experiment.