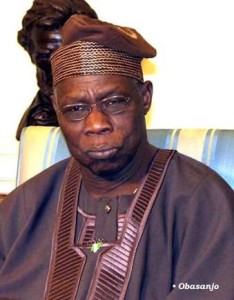 Former President Olusegun Obasanjo on Monday accused some state governors in the country of living like emperors while demanding sacrifice from the citizens for Nigeria to survive the prevailing hard times.

Obasanjo spoke at the inaugural conference of the Ibadan School of Government and Public Policy at the University of Ibadan, where he was the chairman on the occasion.

The two-day conference has as theme, ‘‘Getting government to work for development and democracy in Nigeria: Agenda for change’’.

The Chairman, Board of Governors of the ISGPP, who is a former Secretary-General of the Commonwealth, Chief Emeka Anyaoku, and a professor of international history and politics, John Evans, also delivered addresses among other speakers.

Obasanjo said when he became President in 1999, he recognised corruption as a major impediment to the development of the Nigerian state.

This, he added, informed his decision to set up the Economic and Financial Crimes Commission and the Independent Corrupt Practices and other Related Offences Commission to fight the bane.

He, however, said after he left, corruption returned to Nigeria with a vengeance, draining billions of dollars from the nation’s economy that could hardly afford to lose even a million dollars.

He said while Nigerian leaders demanded sacrifice from the citizens, they lived in opulence.

Obasanjo added, “Leaders, who call for sacrifice from the citizenry, cannot be living in obscene opulence. We must address these foundational issues to make the economy work, to strengthen our institutions, build public confidence in government and deal with our peace and security challenges.

“We must address the issue of employment for our teeming population particularly for our youths. Leadership must mentor the young and provide them with hope about their future as part of a process of inter-generational conversation.

“Nigeria is a country where some governors have become sole administrators, acting like emperors. These governors have rendered public institutions irrelevant and useless.

“Is there development work going on in the 774 constitutionally-recognised local government councils, which have been merely appropriated as private estates of some governors?

Obasanjo accused the local government chairmen of embezzling the remaining council funds after the governors would have diverted a sizable portion of the funds.

He stated, “Of course, when governors take their money, the chairmen of the councils take the balance of the money, put it on the table and share it out among council members. In some local governments, have the governors not hijacked most of the resources in them and expended them to serve their whims and caprices instead of using the resources to galvanize growth and development?

“Have we embraced the principles and values of the presidential system of government such as to enable us to realise our vision of a great country?

“When are we going to be able to practise federalism in a way that promotes healthy competition among the states for the benefit of the citizens? When are we going to subordinate partisanship to collective goals and deploy the full potential of our diversity in advancing public causes that serve the aspirations of the teeming masses of our people crying under the cringe of poverty, disease, unemployment and neglect? When shall we all unite around the Nigeria dreaming our quest to be the giant, which God has graciously endowed us to be?
Culled from Punch