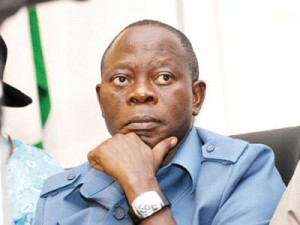 Barely two years after losing his first wife Clara to the cold hands of death, Governor Oshiomhole has reportedly married a new wife.

The new girl whom report says frequently shuttles the state house and the comrade’s hometown in Iyambo, Edo State, coincidentally shares the same name with the governor’s daughter Jane, who was recently delivered of a baby boy.

Though details of how they met are still very sketchy, Global News gathered that it was shortly after the demise of the late first lady that their relationship became obvious.

Expectedly, the new wife is said to be enjoying life to the fullest as the wife of a state executive governor. Though Oshiomhole is hesitant about declaring her at the moment as the first lady based on political calculations, the sultry lady, we gathered, will automatically become the first lady if and when Oshiomhole wins the forthcoming election.

At the moment, she already has everything at her beck and call as it was alleged that her husband never deprived her of every good thing she needs. “Besides the first lady title that is missing, I can tell you that Jane has everything she needs. Name it, she does no job than to personally cook for her man whenever he is around. Her driver takes her to school on the state’s expenses and she is comfortable with her husband’s family, what else does she want?” the source squealed.

It will never be forgotten in a hurry that the late wife died at age 54 years on Tuesday, December 7, 2010, at the Abuja Clinic, Maitama, after a protracted battle with breast cancer.

The late Mrs Oshiomhole was survived by her husband and five children:  Cyril, Winnie, Jane, Steve and Adams Jnr.