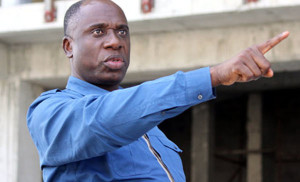 With few months to the 2015 general elections in the country, many people are apprehensive about the outcome of the elections, if it will tilt towards the predictions of the Americans of dividing the country.

One of the states many are looking at is no other than Rivers State. The state became the centre of attraction because of the faceoff between the governor of the state, Rotimi Amaechi and the president, Jonathan Ebele Goodluck. First among the reasons for the battle to bring him down, according to those in the know is the desperate ambition of Dame Patience Jonathan to see herself and be addressed as the political ‘lord’ of Rivers State, her home state despite the fact that she is even not recognised by the constitution and is not occupying any elective office.
[showads ad=GLO]
This seeming bottled-up anger culminated in the incident that occurred in Okrika, the first lady’s hometown, in which she snatched the microphone from the governor and reprimanded him for saying he would buy off some buildings around a school and demolish it so as to create enough space for extracurricular activities for the school. [showads ad=GLO]

After this incidence, there had been a no love lost situation between the presidency and Governor Amaechi in which his former aide, Nyson Wike joined on the side of his new employer.

However, many stakeholders believe that to defeat Governor Rotimi Chibuike Amaechi or even any candidate he decides to support in 2015 in Rivers State is going to be as difficult as getting the Biblical camel to pass through the eye of a needle. And the reason for this is obvious – Amaechi, a former Speaker of the Rivers State House of Assembly, is a man of the people who has been playing politics in the grassroots for many years and has a firm grip of the loyalty of his people. Nothing exemplifies this like his recent visit to all the local governments in the state, where people trooped out daily to salute and appreciate him. [showads ad=GLO]

The Governor, those who are rooting for him claim he has touched nearly all the sectors in his almost eight years in office – from education to health, security to rural infrastructure, etc. these and more are the criteria they are positing for his political weight in the state. [showads ad=GLO]

One of the strongest politicians in the state said that “Gov Amaechi is an unusual governor who will mingle freely with his people and hear them out unlike the others who see themselves as unequal with the ruled. And this has been going on well for him” he concluded. [showads ad=GLO]

Those who are apprehensive are of the opinion that any attempt to forcefully take over the state from him next year will be met with stiff resistance, except is through free and fair democratic process which many believe it is not possible. And any attempt to thwart that will not succeed, it will also be resisted by some of the people we spoke with. [showads ad=GLO]

Amaechi, known as the Miracle Man of the Garden City because of the monumental development he has brought to the state, became the enemy of the Federal Government for protesting the loss of some of their oil wells to Bayelsa State. Currently in APC (All Progressive Congress), members of his former party and some of his aides whom they have bought over have been trying to distract him to no avail. His recent tour of all the local governments under him is a good proof. [showads ad=GLO]