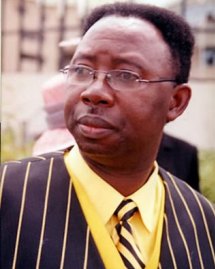 There is a popular saying that the love of money is the root of all evil and this has over the time led to the fall of many pastors who could not resist the urge.

One of such pastors is the general overseer and the presiding bishop of the El-Shadai Bible Church,  Bishop Joseph Olanrewaju Obembe, who is the former chairman of Pentecostal Fellowship of Nigeria (PFN), Lagos State Chapter.

Recently, the supposed man of God was dragged to court in Lagos by his business partners for fraud in a crude oil deal. The bishop’s partners alleged that the cleric cheated them out of a huge amount of cash after some prospective investors offered $9 million for an oil deal. Sources revealed that the former PFN leader declared to his partners that the deal was for $1 million instead of $10 million that was the actual offer by the investors after which he was said to have mandated them to pay 10 per cent of the money to his church as tithe.

The bishop who had been working on perfecting ways he would swindle his partners had in December 2010 filed a lawsuit where he accused his partners of forgery. In the suit, he accused them of altering the letterhead of Elshaddai Petroleum Limited with intent to dupe his company to the tune of N100 million. This was, however, refuted by his partners and his supposed witness whose testimonies contradicted that of the cleric, indicating that it was the bishop who was actually responsible for defrauding his business partners.

In the case which is before Justice Okunnu of the Lagos State High Court in Ikeja, the witness of the bishop, one Helyn Aninye, in her testimony portrayed the bishop as the traitor whose greed caused the collapse of the business relationship. Her words were corroborated by the witness of the partners who also claimed that the bishop’s greed and intent to defraud were responsible for the collapse of the business arrangement.

The testimonies which were in favour of the partners which consisted of Mr. Remi Folorunsho, Pastor Olagunju, Bishop Obembe, Mr. Sajuyigbe and later Ms Aninye, showed how they entered into an agreement in 2006 to pursue an oil bloc business where Lanre Obembe’s Elshaddai Petroleum Limited would be used as the bidding firm for bloc as it was then too late to register another company. Subsequently when they won their bid for the bloc marked ‘294’ in the Niger Delta for $51 million, unable to finance the business, the partners went searching for investors for their oil bloc and it was at this period that the partners started noticing changes in the man of God.

In their testimonies, the partners claimed the bishop who owns the bidding company together with his family had agreed to change ownership of the company where all the partners would be made directors in the El Shaddai Petroleum Company but  that the firm had not filed all the relevant forms to be registered before the partnership began crumbling due to the pastor’s love for money.

According to Mr. Sajuyigbe, the partners agreed that Bishop Obembe should remain as chairman of the company, while Mr. Folorunsho began serving as the chief executive officer. Ms. Aninye, who is a lawyer, served as company secretary and legal adviser, and Mr. Folorunsho served as the finance director while Pastor Olagunju had no special function but served as liaison for the team abroad because he is based outside the country.

The partners claimed the pastor’s attitude changed when some investors showed interest in the oil bloc and offered to fund the business. A decision was later reached to accept one of the prospective investors, IGI, which was incidentally introduced by the bishop. It was, however, sad to know that the supposed man of God allegedly concealed the actual value of IGI’s investment, which was $10 million by declaring only $9 million to the other partners, out of which he asked them to make payment of 10% of the $1 million as tithe to his church.

According to the partners, it was later that they discovered from reliable sources that the actual amount offered by IGI was $10 million and it was the discovery that led to a rift in the partnership. They further explained to the court that, when the partners confronted Bishop Obembe over his fraud, the cleric described it as “a mistake of the mind and not of the body.”

A lawyer familiar with the partnership claimed that the other partners opened a new domiciliary account and advised IGI to pay its investment there, a move they had also informed the bishop. This he explained was designed to checkmate his fraud and this reportedly infuriated Bishop Obembe who then decided to file a lawsuit accusing the other partners of “forgery” of letterhead to enter into correspondence and for the purpose of opening a new account.

It is worthy of note that the man of God had previously had issues concerning his love for money. It was because of money that he had confrontation with the then president of the PFN, Bishop Mike Okonkwo who accused him of mismanaging several millions of dollars  apportioned by American televangelist Benny Hinn for his crusade here in Nigeria. Obembe was accused by Benny Hinn of embezzling more that $4 million of the money the evangelist sent to organizers of the 2005 Lagos Crusade headed by Bishop Lanre Obembe.

The pastor who has been running his church like personal business was also in the past alleged to have through illegal means acquired things for himself; this was said to be the reason he was forced off the place he built his church in Akure, the capital of Ondo State, where those he cunningly took the land from had to employ the help of different cult groups to chase him off their property. The case gave his church popularity in the state as many Christians believed he was being persecuted because of his faith, with only a few recognizing the fact that he was actually the oppressor.

The latest fraud case has, however, been adjourned to another time and it is the belief of his partners that he will not be let off the hook this time around just as it was done during his crisis with the PFN over his embezzlement of the Benny Hinn’s $4 million crusade fund.