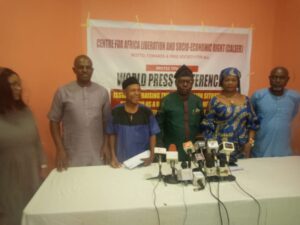 Following the recent rampaging flooding across the country, the Centre for Africa Liberation and Socio-economic Rights (CALSER) says the National Emergency Management Agency (NEMA) has lived up to expectations.

The Centre, which made this known at a world press conference in Abuja today, said its Human Rights and Disaster Management team carried out an extensive analysis of responses and interventions to the natural disaster in the country.

In its assessment report, the Executive Director of the disaster management team, Dr. Mrs Cecilia Ikechukwu, said NEMA has risen to the occasion with critical relief for Nigerians in distress.

The Centre said the interventionist agency donated over 400 trailer loads of relief materials to the 36 states and Federal Capital Territory to cushion the effect of the flooding.

“The National Emergency Management Agency (NEMA) swung into action to alleviate the suffering of victims of the flood. They distributed relief materials worth millions of naira to support persons affected across the different states. The items included the president’s special intervention involving the release of assorted grains from silos,” she said.

“NEMA distributed relief materials, an equivalent of 400 trailer loads of grains to all states of the Federation and the FCT. This is a statement of fact and has been verified by our independent assessors.

“This gesture was also extended to other states affected, especially in Kogi, Anambra, Benue, Delta Bayelsa, and the Rivers States. Internally Displaced Camps were put in place to settle victims who have become homeless. Items were also delivered to the various state governments to assist the most vulnerable groups. The grains were distributed directly to the deserving persons in collaboration with the state government, senators from the various states and the ministers representing the affected states. The aim is to ensure that the relief materials reach affected individuals.

“NEMA played a central role in having the government release grains from its silos. Its assessment reports were forwarded to the Ministry of Humanitarian Affairs, Disaster Management and Social Development, after which President Muhammadu Buhari approved the release of 12,000 metric tons of assorted grains from the National Strategic Reserve Stock for distribution to all states affected and the FCT.”

CALSER also acknowledged the assistance of International groups such as the US Agency for International Development (USAID) which provided $1 million in immediate humanitarian assistance to support the people affected by the unprecedented flooding.

The Centre, therefore, appealed to the State Emergency Management Agencies to “imbibe the spirit of transparency and accountability in the discharge of their duties towards ensuring that citizens affected by this are properly taken care of.”

To avert a future reoccurrence, CALSER, however, advised both the state and federal governments to:

“Build canals and dams to help in controlling the water levels. Especially in Adamawa and Benue, to contain the water released from Ladgo Dam in Cameroon.

“Dredging of the major rivers to allow for easy passage of water. Improved drainage of waterways to avoid obstructions.”