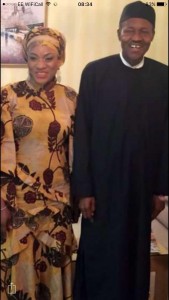 Though the 2015 general elections has come and gone but the echoes and after event of the history making elections is yet to be abated. While many supported President Buhari out of their deep convictions that he’s capable to turn the fortunes of the country around for good others supported him out of what they will benefit from the ex military general. 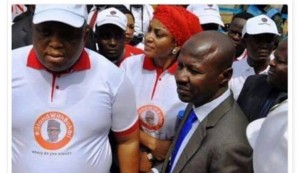 One of those who sees the Buhari project as another source of livelihood and one that could pave way for them in the corridors of power is London based Nigerian Aisat Alubankudi who was during campaign single handedly turned herself to Buhari’s campaigner on social media dishing out series of information in favor of the then candidate of the All Progressives Congress .

Her prayers was answered with the election of Buhari and as usual saying in the bible “pass me not o Lord” Aisha literally relocated to Nigeria to see how she can get something out of the newly formed government and pronto she abandoned her family and job in London.Her hope was dashed when Buhari refused to fully recognize the office of the First Lady because this is one office according to those responsible who are closer to her she wanted to attaché herself to .

When that one failed woefully ,she moved her hustling office to I stand with Buhari group. When the group first appeared on the Nigeria media space many people thought that they were all out out to stand aloof with the former military general who has been facing series of criticism from the opposition parties and well meaning Nigerians based on his policies and approach to governance. The group simply turned to beautiful bride overnight with those who are in support of the president using the slogan of #istandwithbuhari and in no time the paraprashe was spreading like harmattan fire especially when they claimed that they are standing with Buhari in his fight against corruption.

Hate it or love it but there is no movement before the bubble burst more earth shaking in Nigeria than the #IstandWithBuhari group, where 9 million Nigerians will gather to affirm their support for President Muhammadu Buhari on March 31st 2016. It becomes an unconscious song on the lips of Nigerians, so much that everyone is waiting for the day they will storm Abuja. It has become more iconic that the #BringBackOurGirls campaign is becoming a learner.

But the cookies finally crumbled when it was discovered that the group is nothing but a fraudulent association which is all out to milk unsuspected public and government agencies dry by asking them to support the evil campaign with money to the tune of well over N1b . This generated a lot of controversy as many believed that if they are sincere in their quest to entrench good governance what do they need the money for.

The presidency have no other option than to publicly denounce the group and in a statement released by the spokesperson for President Muhammadu Buhari, Garba Shehu, the Presidency also demanded that the person behind the controversial group should stop using the President’s name and that of his wife, Aisha Muhammadu Buhari to promote themselves and their activities.

This is where Aishat Alubankudi’s world came crumbling with no option than to pack her bags and moved back to London having exhausted all the tricks and returned to her care giver job where she’s alleged to be taking care of old people with dementia.

What many people do not know from her fake lifestyle is that she pretends and acts like a woman from the Northerrn part of Nigeria but alas she’s a Yoruba woman from Ijebu-Jesha in Osun state South-West of Nigeria and if you care to see her,she’s presently somewhere in Brentford West London licking her wounds in her council flat.