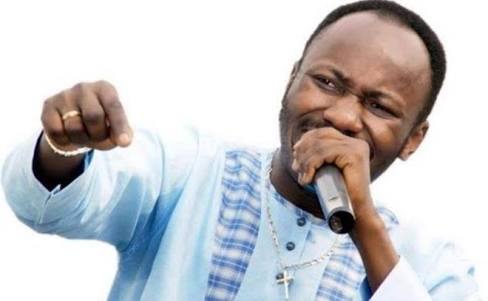 It’s now a known fact that Nigeria is now a breeding ground for pastors,prophets and clerics of many kinds.Across the length and breadth of the country,these so-called men of God have now become so important because they have constituted a very powerful bloc; but the sad thing is that a handful of them are now desperately seeking relevance where there is none – notable among these last set is the firebrand Senior Pastor of the Omega Fire Ministry, Apostle Johnson Suleiman.

Our dear Apostle Suleiman is so prone to gaffes that even some of his followers are now wondering why the man of God is now courting controversies here and there with many “unforced errors” and damaging utterances.He is fast becoming the enfant terrible in cassock as far as Nigeria is concerned to say the least.Apostle Suleiman’s has goofed so many times in recent times and this has negatively positioned him and put in a bad light amongst the thoroughbred Christians in Nigeria.

Our fiery Apostle Johnson Suleman came into spotlight when he prophesied that a governor in Nigeria was going to die in 2016. He also clashed with Kaduna State Governor El – Rufai over the religious bill in the state. Apostle Suleman was also one of those who denounced the popular ponzi scheme MMM as demonic and fraudulent before he later sacked one of his pastors named Joseph Aiyedun (who was pastor-in-charge of Aba,Abia State’s branch of Omega Fire Ministries) who was alleged to have used the name and account of the said church to register MMM scheme for himself.

And to the utter surprise of many in Christendom and the country at large,this fiery Edo State-based preacher recently caused another stir by calling for the killing of Fulani herdsmen found near his church in his own response to the incessant killings of innocent people by these Fulani herdsmen.

And on January 2 this year at the church’s monthly Miracle and Fire Night Service in Auchi, Suleman said President Buhari’s “silence on the genocide in Southern Kaduna has continued to fuel mutual recriminations and distrust‎ among the diverse ethnic and religious groups in the country.” Suleiman said he had been warned that Fulani herdsmen were planning to attack him, and erroneously urged his security guards to “kill any herdsman found around his church”.

The preacher later explained that he was not targeting any Fulani herdsmen, but only those who may seek to kill him, saying that killing them would be in self-defence.

He also made another gaffe immediately after Governor Fayose helped him escape DSS arrest that if he was arrested for one day Nigeria will suffer for it.“If I spend one day in the custody of the DSS, the damage it will cause will take one year to repair. If I spend one day, the damage that will happen to Nigeria will take one year to repair,” he boasted.