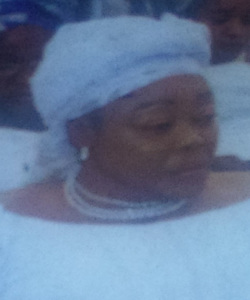 <[showads ad=GLO] /a>We are a publication with a reputation for courting the most audacious of controversies and we love it. Not too long ago, we wrote extensively about the ‘war’ going on in the household of late multi-billionaire transport magnate, Chief Augustine Ejikeme Ilodibe of Ekene Dili Chukwu fame. After the demise of the revered Igbo moneybags in 2007, his family was and is still enmeshed in a huge battle for the control of his very sprawling financial empire. There were threats and counter-threats and his three wives never saw eye to eye. In fact, their level of enmity was legendary. They hardly spoke to each other while the man was alive, so when he died and his will was read, the division further widened as both the first wife Catherine Uduayibo and third wife Pauline Ngozi Ilodibe (all now late) practically rejected the will as it seemed to hugely favour the second and most recognized wife, revered society matriarch, Chief Mrs. Ifeoma Stella Ilodibe. Ifeoma who bore the late transporter his first son immediately swooped into action by taking over the transport business through her son. While the daughters of the first wife acting with the authorization that their mum married the late Chief in church and so was his real legal wife seized a very sizeable chunk of the estate, [showads ad=GLO]principally houses and many landed properties, the third wife who also happens to be a lawyer immediately seized some of her late husband’s properties in Onitsha worth hundreds of millions of naira and started selling them outright to buyers. Most parties discarded the will as the scramble and partition for the Ilodibe empire was at a feverish peak. [showads ad=GLO]

Before one could say Jack, they all landed in court with a ferocious legal battle that is certain to climax at the Supreme Court. Ifeoma Ilodibe is without doubt the most prominent of the entire Ilodibe clan. The hugely popular society lady is ravishingly pretty, fashionable and above all is a renowned jewelry connoisseur who has remained a reference point to most Lagos society women. [showads ad=GLO] She seems to be miles ahead of other members of the Ilodibe household principally because she commands respect within not only the Igbo social establishment but also with the very Nigerian elite society. So as the ‘war’ raged on, she kind of became the unofficial face of this sinking household. As at then we reported that a source spoke to us on condition of anonymity saying they feared this vicious fight will take the turn for the worse.

Let us be the first publication to announce that the third wife, Ngozi Pauline Ilodibe is dead. She died weeks ago after a very brief illness. According to family sources and neighbours we spoke to in Onitsha, she was very hale and hearty, but all of a sudden became ill and her sickness only got worse. Her body rejected most of the drugs administered to her and she began to swell up. [showads ad=GLO]This forced her first son, Odera Ilodibe and other family members to take her to a very high profile private hospital in Enugu where she eventually gave up.

Her burial has been slated for the 25th of September, 2014. But there have been accusations and counter-accusations on what might have or not have killed her. From most of what we gathered in Onitsha, Ifeoma Ilodibe and her children seem not to be in the picture of all these messy accusations at all. Friends of Odera Ilodibe told this magazine that unknown to most people, there had been a very long fight between Odera’s mum, the late Pauline and the children of the first wife. So ferocious was this fight that death threats were always bandied about. [showads ad=GLO] The struggle for who will be in total possession of the sprawling family mansion in GRA Onitsha was the centre point as the late transport mogul had mandated that while the first wife was alive, she and her daughters would occupy a wing of the GRA mansion which also serves as the Eastern base. But he stated that after the death of the first wife, her daughter would be relocated to another of his properties in Onitsha thereby leaving the entire GRA house to his third wife, Pauline Ngozi Ilodibe. It was this part of the will that the children of the first wife vehemently rejected and decided to fight for what is rightfully theirs. [showads ad=GLO]

So, after the first wife died in 2011, her daughter refused the GRA mansion and Pauline in turn would have none of that. It was clash of the titans as both groups went for each other’s throat in Onitsha. [showads ad=GLO]Residents of Onitsha GRA told us of their constant fights which sometimes saw both factions trying to intimidate each other with law enforcement agents. Neighbours who spoke to Global News said they were not surprised at the death of the 3rd wife Pauline. In fact, they predict that as things stand today, more heads might soon roll as the revenge song is being sung by the bereaved faction.

It is generally believed that the reason the Onitsha war was not really in the Lagos press is mainly due to the gladiators not being public figures like the second and the most recognized wife Ifeoma Ilodibe, who is a show-stopper at Lagos parties. [showads ad=GLO]The burial of the 3rd wife is 25th of September and we shall be reporting live from Ndingbu, Okofia, Otolo Nnewi where she is expected to be buried. Without doubt, it promises to be colourful as the Ilodibes are known for drama-infested burial ceremonies.