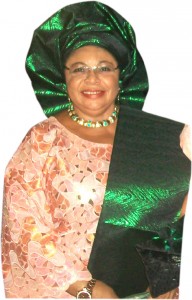 The Ilodibe clan is a very interesting and intriguing family. The various gladiators and camps sure have a very sustainable way of being in the news. In the not too distant past we had written about this iconic Igbo family solely because it is of public interest. Even at that, one name that remains supreme within that household is the late multibillionaire’s second wife and mother to the heir of the Ilodibe dynasty, Chief Mrs. Ifeoma Stella Ilodibe. For those who do not know her, Obidie, as she is fondly called, is the super-stunning and very aristocratic wife of the late Ekene Dili Chukwu boss who died in 2007. She glows like a million dollar aquatic gemstone and has a panache that is unrivalled amongst society ladies.

Since mid-last year ifeaoma Ilodibe has been conspicuously missing from the society scene, making most society ladies to wonder where this pretty society matriarch of Igbo extraction is.

Initially, the gist amongst her close friends was that she was holidaying in the UK as it has always been her usual tradition. Then later, the gist changed to the fact that her son and the crown prince of the Ilodibe household, Ekene junior’s wife had put to bed a bouncing baby boy. So having eventually got a grandchild from her son, she was taking care of mother and the child in UK. That also we thought was the sole truth until we arrived at the burial ceremony of the late brother of multi billionaire Nnewi business magnate, Prince Hilary Unachukwu, the Ogbata Onuba of Nnewi.

Hilary was an avowed polygamist and had a penchant for marrying super-sexy light-skinned ladies. He spoiled them with everything money could buy; cars, houses, gold, diamond and even globe-trotting. But he would make them undergo certain demonic rituals that we shall not put out. At this stage he was close to the Ekene Diili Chukwus but was very “close” to Ifeoma Ileodibe. Therefore, it came as no surprise that Ifeoma chose to honour her invitation to her husband brother’s funeral. It was Ifeoma’s arrival that caused a massive sensation.

Prior to this time Ifeoma was used to arriving at functions in the admirable manner she sashays in and walks straight to the most prestigious table. On this particular day, as her car arrived at the venue of the party, Ifeoma could not come out of the car on her own. She had to be helped out of the car by two Nnewi ladies. If you still don’t get the drift, let us put it out in plain English, “Ifeoma Ilodibe could not stand on her two feet”.

From investigations, we gathered that Ifeoma’s legs had begun to trouble her months back and that accounted for her exit from the party scene. She was obviously in a lot of pain thereby making people to wonder why she chose to ridicule herself by turning up for that funeral. But even at that, the answers we got were mind-blowing.

Most prominent Nnewi people at the occasion said she must have initially considered not coming but on second thought she was very close to Hilary Unachukwu and would not want to offend him in any way. That must have been the overriding reason why she had no option but to show the world her current state of health.

One of the women who helped her back and forth was Apo Nkoenye. Most women who were very shocked to see Ifeoma unable to walk were of the opinion that this was somehow connected to the struggle of the Ekene Dili Chukwu’s financial empire. There has been a big and messy fight since the death of Chief Ejikeme Ilodibe over his multibillion naira estate. But smartly and tactfully, Ifeoma, who is the most prominent and recognized wife, emerged the most advantaged. Her son, Ekene jnr. is the group managing director of Ekene Dili Chukwu Group of Companies. She and her kids are up against the children of the first wife and the third wife.

The fight has been messy and ferocious. So many peace moves have been initiated but always never works in the end because Ifeoma is said to maintain a non-negotiable stand that she has his (late chief’s) first son and in Igbo land, the (Diokpala) first son takes it all. The news was agog at the venue that the opposition had not gone to sleep and that there are obviously spiritual arrows being fired back and forth and it is only a question of time before heads might begin to roll.

As the hatred amongst members of the Ilodibe clan is now at a phenomenal stage, let us finally state that it is with a deep sense of sadness that we wish our admirable high chief Mrs Ifeoma Ilodibe soonest recovery. We hope she is able to walk on her feet again and soonest as her absence will be greatly missed on the party scene. But for clarification purposes, we have pictures of Ifeoma arriving and leaving this funeral, we also know so much about the revered Hilary Unachukwu and will not hesitate to take this story to the next level should this publication be provoked by any means.