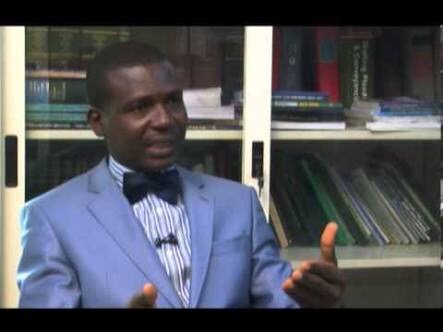 Lagos-based human rights lawyer, Ebun-Olu Adegboruwa, has attributed his recent arrest by the Economic and Financial Crimes Commission (EFCC) to his criticisms of the President Muhammadu Buhari’s government.

In a statement issued by his law firm, Wednesday, Mr. Adegboruwa denied claims by the anti-graft commission that he was involved in a N61 million fraud.

Last week, he sued the Nigerian government on behalf of Robert Azi‎baola, former president Goodluck Jonathan’s cousin who had been in EFCC detention since March.

Mr. Adegboruwa was arrested on Monday for allegedly obtaining money under false pretence.

He was accused of conspiring with others to lease a property in Nicon Town Estate, Lekki, to Shelf Drilling Nigeria Limited; despite knowing that the property was under interim forfeiture by a Lagos State High Court.

According to Mr. Adegboruwa, he was approached by one Sylvia Udeagbala in 2013 to represent her husband in a criminal case.

“In our first appearance in court, it transpired that the complainant in the case, Chief Leonard Okafor and the Defendant, Mr. Jonathan Udeagbala, were from the same town,” said Mr. Adegboruwa.

“It was thus decided to settle the case amicably out of court, and the court and the prosecutor were so informed.”

The EFCC had arraigned Mr. Udeagbala, a businessman, before a Lagos High Court in August, 2012‎, for allegedly defrauding Mr. Okafor of N106 million.‎

“Upon the intervention of our law firm, several peace meetings were held with the complainant in the case, Chief Okafor, and it was agreed that Mr. Udeagbala’s house in Nicon Town should be sold or leased to offset the money outstanding in favour of Chief Okafor,” said Mr. Adegboruwa.

“Mrs. Udeagbala then secured a tenant, Shelf Drilling Co Ltd, for a five year long lease of about Eleven Million Naira per annum.”

According to Mr. Adegboruwa, all parties agreed to share the proceeds ‎of the lease as follows: Mr. Okafor – N35million; Mr. Udeagbala – N12million; ‎renovation of the house by the contractor chosen by the tenant – N8million; fee paid to the agent – N2.5million; legal fee – N2.5million.

“The above sums were by agreement of all the parties duly disbursed, with documentary evidence of collection,” Mr. Adegboruwa.

“When EFCC got to know that the said property had been let out to Shelf Drilling for five years at the rate of N10million per annum, they told Shelf Drilling that the earlier money paid had been forfeited.

“EFCC then asked Shelf Drilling to pay N12million per annum. A sum of N24million has so far been collected by EFCC. In fact, we are informed that as at yesterday, 10th May, 2016, EFCC served the tenant another invoice for rent for 2016.”

Mr. Adegboruwa said part of the terms of the settlement was that Mr. Okafor would withdraw his petition to the EFCC, which the latter did through a letter of withdrawal written by his lawyers, Atuegwu Egwuatu & Associates, dated 19th August, 2013, and which was received by the EFCC on 17thSeptember, 2013.

“Consequent upon the withdrawal, the criminal charge was dismissed by the High Court on 17th December, 2015, in a well considered ruling delivered by Hon. Justice D.O. Oluwayemi and the EFCC is aware of this.

“At all material times, our law firm was not aware of any interim order of attachment obtained by the EFCC on the property. With the ruling of Hon. Justice D.O. Oluwayemi which has dismissed the main criminal charge, there can be no subsisting order of attachment as something cannot be placed on nothing and be expected to stand.”

Mr. Adegboruwa said he had been receiving “unofficial complaints” from the EFCC over his opposition to Mr. Buhari’s government, including a threat to reopen Mr. Udeagbala’s “dead case.”

“But the threats became more rampant upon his brief in the case of Chief Government Ekpemupolo (Tompolo) and especially Mr. Azibaola Robert, cousin of former President Goodluck Jonathan,” he said.

“So, there is no fraud case against Mr. Adegboruwa.

“There is no way a criminal case can be maintained against Mr. Adegboruwa as the criminal case upon which the case is based has been dismissed.

“Mr. Adegboruwa did not collect money for any property but acted as a mediator for settlement and he acted upon the lawful instructions of his client.”