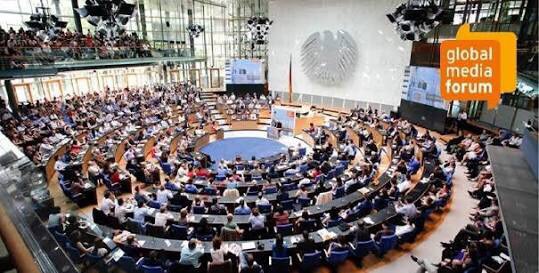 Freedom of speech and freedom of the press are increasingly facing limitations the world over; in order to counter the culture of disinformation and manipulation, “We need to rethink the way in which we perceive, demonstrate and spread our values.” With those words, DW Director General Peter Limbourg opened the Global Media Forum in Bonn on Monday, June 13, 2016.

Limbourg greeted more than 2,000 guests from over 100 countries, including representatives from a number of partner broadcasters, at the ninth annual media conference from the German international broadcaster. The topic of the three-day conference is “Media. Freedom. Values.”

“Only when people are able to communicate freely, there will be change. The possibility to share ideas and values with others and the chance to inspire those, who are still under the control of dictatorial regimes,” said the Director General.

Deutsche Welle has positioned itself on a path to digitalization – and drawn upon more than 4,000 partners from around the world. Part of this strategy includes co-productions with partners to the benefit of both parties. “This is a first in international broadcasting. And an important step in recognizing the value of the contribution of regional partners,” said Limbourg. “We truly appreciate the local expertise and perspective which our regional partners contribute.”

Limbourg lamented the state of affairs in which instead of preserving the universal prestige of the right to speak one’s mind, in increasingly more countries, limitations are being placed on laws protecting freedom of expression. He cited Turkey, where critical media personalities are being suspended by members of President Erdogan’s governing party, where unwelcome journalists are labeled terrorists, without grounds, and being thrown in prison. “In the heart of the EU, freedom of the press cannot be taken for granted,” said the Director General. With an eye cast on the national-conservative powers in Hungary and Poland, Limbourg said, “But nothing – and I stress – nothing – justifies a limitation of the freedom of expression to be rooted within a democratic constitution.”

Limbourg referred to the example of Germany. “Even here in Germany, the enemies of the freedom of the press are at work.” Right-wing populists of all shapes have problems with tolerance and with a diversity of opinion, he said.

Journalists themselves can endanger freedom of the press. “If they don’t research with due diligence, if they copy without checking the facts, or if they scandalize every harmless occurence. Because thus, they provide arguments to their enemies,” said Limbourg.