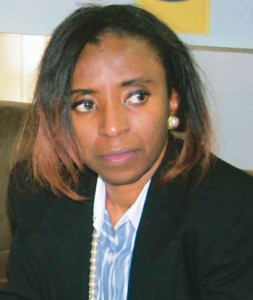 For Federal Inland Revenue Service (FIRS) executive chairman, Ifueko Omogui Okauru, fashion and beauty may not be her virtues, but she is alleged to know how to swim in the murky waters of corruption. The pint-sized and skinny lady who was on the shelf for a long while before the director-general of the Nigeria Governors’ Forum and foundation staff of the Economic and Financial Crimes Commission, Dr. Asishina Bayo Okauru who earlier split with his wife, spotted and married her in what could pass as a marriage of convenience. They came together because of business …and business has been very good.

At one time, a consultant to Economic and Financial Crimes Commission, the managing director of ABZ Integrated Limited, Fidelis Uzowanne who made a discovery of tax evasion by Chevron Group of Companies, and was instrumental to the payment of about US $492 million (over N73 billion) by the multi-national company to FIRS, invited the commission to prosecute Ifueko who collected the money on behalf of the Federal Government but only remitted 131 million dollars.

The remaining US $360 million found its way into private pockets including that of Ifueko. Moved by the manner the Federal Government was shortchanged, Uzowanne petitioned EFCC under Farida Waziri to investigate the activities of Ifueko regarding the Chevron Group of Companies’ tax issue.

But nothing to worry about as the tax administrator had somewhere to turn to. She turned to her husband, who used his connection in his former office to quash the matter, and ensured that the financial crimes commission did not press charges against his wife.

The same man has also been using his political connections to pull some strings and extend his wife’s four-year tenure as executive chairman, Federal Inland Revenue Service. Sometime last year, the couple threw a dinner party for newly-elected governors at Asokoro in Abuja, which cost them about N27 million. The huge logistical problem of getting the governors together was handled by the husband who is the director general, Nigeria Governors’ Forum while the wife footed the bills.

However, the new governors were not the first and only recipients of such treat. The case of Mike Oghiadomhe who was re-appointed as chief of staff to President Goodluck Jonathan following the victory of his principal at the polls was much the same. It is said that Oghiadomhe, who is into male adults’ entertainments, women, drug and alcohol, and allegedly dates immediate-past boss of EFCC, Farida Waziri, also got two bullet-proof cars and N100 million as gifts from the couple.

Before now, it happened that Ifueko got former secretary to the government of the Federation, Ambassador Baba Gana Kingibe to issue two letters of appointment to her when she was re-appointed as the executive chairman, FIRS in 2007. In the first letter of appointment dated May 14, 2008, Kingibe wrote that the re-appointment took effect from May 3, 2007. It was later backdated to May 2007, so as to accommodate the period Ifueko used in office after her first tenure expired, and she had not been re-appointed. 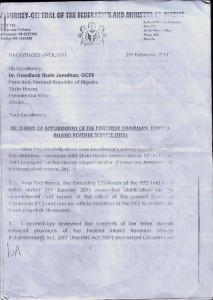 Later on, another letter came from the same Ambassador Kingibe at Ifueko’s request dated August 12, 2008, regretting the error in the effective date of the commencement of her re-appointment, and stating that it took effect from the day the upper legislative chambers confirmed the re-appointment, which was about a year interval.

The letter reads: “With reference to my letter Ref. No. SGF.50\S.50\110 of 14th of May, 2008, conveying the president’s approval for your re-appointment as executive chairman, Federal Inland Revenue Service, I write to regret the error in the effective date of the commencement of your re-appointment, which I indicated as 3rd May, 2007.

“The correct effective date should have been indicated as the date of the confirmation of your re-appointment by the Senate in accordance with Section 3(2) of the Federal Inland Revenue Service Act, 2007 which was effective from the 10th of April, 2008.”

However, the attorney-general of the federation and minister of justice, Mohammed Bello Adoke differed with Ambassador Baba Gana Kingibe on the date Ifueko’s appointment took effect and when her tenure would end. It was Adoke’s deep conviction based on the Federal Inland Revenue Service Act {Establishment}2007 that her re-appointment became effective 3rd May, 2007, which was Kingibe’s initial position, and terminated on May 2, last year.

The justice minister’s verdict was communicated to Ifueko in his response to her letter of January 21, 2011 where she sought clarification from him on when her tenure truly commenced and when it would come to an end. Adoke faulted the second letter issued by Ambassador Kingibe for not taking cognizance of the time already spent in office by Ifueko prior to the confirmation by the senate, adding that any attempt to uphold it would render all decisions taken by the executive chairman between the end of her first term in office, and the confirmation of her second term by the senate null and void.

This honest opinion held by Adoke had left a degree of friction between him and Ifueko even long after the latter had her way, and was in office beyond May 3rd 2011. It is said that the largesse dispensed to the president’s chief of staff, Oghiadomhe made him return favour when Ifueko needed it. He, Oghiadomhe, advised her to write a letter to President Jonathan on the matter, and route it through his own office, which she did.

Thereafter, Oghiadomhe took up the matter and wrote a memo to President Jonathan dated 16th February 2011, where he suggested that the second appointment letter issued by Ambassador Kingibe to Ifueko, which makes her term end in April 2012 should subsist.

The memo reads: “I have had the opportunity of perusing both submissions, including copies of the two letters of appointment of the executive chairman as issued by the SGF and wish to observe that a dispassionate analysis of the letter from the SGF, and the opinion of the HAGF shows without equivocation that the provision of Section 65 FIRS Act, 2007, is subject to other provisions of the Act; i.e., Section 3(2), which makes appointment of the executive chairman effective only after confirmation by the senate and not otherwise. 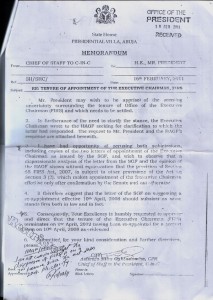 “Consequently, Your Excellency is humbly requested to approve and direct that the tenure of the executive chairman, FIRS, terminates on 9th of April, 2012 having been re-appointed for a second term on 10th April, 2008 as evidenced.”

Sources said that Ifueko has perfected strategies to break the rule under which FIRS operates in order to have another term. The FIRS Act recommends a maximum of two terms of four years each but the sitting executive chairman is said to be going around with Finance Minister Okonjo-Iweala who is her friend and Oghiadomhe to lobby President Jonathan and his wife, Patience, for third term.

7 thoughts on “Dirty Deals of FIRS Boss, Ifueko Omogui Okauru – How she plots to elongate her tenure + Why she is fighting AGF Mohammed Adoke”