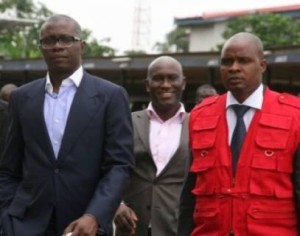 Trouble is yet to be over for the boss of Ontario Oil and Gas, Walter Wagbatsoma as the oil magnate began his defense before Justice Lateefa Okunnu of the Ikeja High court.
The Economic and Financial Crimes Commission (EFCC) had on Tuesday, February 26, 2013, re-arraigned Walter Wagbatsoma, his company, Ontario Oil and Gas, Adaoha Ugo-Ngadi, and Fakuade Babafemi Ebenezer before Justice Okunnu for an alleged N1.9 billion fraud in the ongoing prosecution of those allegedly involved in fuel subsidy scam before Justice Lateefa Okunnu.
The five suspects were arraigned on a nine-count charge bordering on alteration, forgery, conspiracy and obtaining property by false pretenses.
At the last hearing, during cross examination by the prosecuting counsel, Rotimi Jacob (SAN), the defense witness, Raphael Onwuziligbo, a retired Assistant Superintendent of Police (ASP) attached to Forensic Department, Force CID told the court that his office received a request on January 9, 2015 to examine a document and authenticate whether the signature on the documents were forged or not. In the course of his examination, he told the court that he used a magnified glass as part of apparatus to carry out his investigation and used photocopies of the documents.
“During analysis, I found out that the master pattern which the maker of the signature signed remained unhampered,” he said.
While opening his defense led in evidence by his counsel, Wagbatsoma told the court: “Sometime in July 2002, I heard from the news media that I had been charged to court because then I was abroad. Before then, an investigation was commenced by the EFCC concerning my company about the subsidy fund.”
He continued: “We have been involved in the business of oil for the past three years but the allegations made against me and my company were not true. We import products and have never interfered with the laid down rules and regulations. We brought the products imported to the tank farm since we do not have our own tank farm. So any activity that happened at the tank farm is not our business.
“When I came back from abroad, I went to report at the EFCC office and the agency insisted I must make a statement and threatened that they would not proceed with my bail condition if I did not write a statement.”
On allegations of discharging lower quantity instead of the whole quantity imported and paid for by the government, he said: “The industry convention says where there is a third party transaction and a company doesn’t have tank farm, the company must submit documents to the tank farm representatives. As a company, it is not possible for us to commit a fraud. I don’t know Integrated Oil & Gas, not even the owners. The Shore Tank Certificate was signed by Integrated Oil and Gas alone, owner of the tank farm the product we imported was discharged into. Our representative was not present so we do not know where the EFCC got the document that claimed we discharged lower quantity to the tank farm. We discharged all the 14, 853 metric tonnes imported,” he claimed.
Watgbasoma continued; “It is not possible a surveyor representing a company would witness a discharge and not sign it. It is not possible for us not to have raised alarm on a product discharged but not signed. We discharged all the products but we do not know where, when and how Integrated Oil and Gas signed the Shore Tank Certificate that stated we did not discharge all the quantity. The allegation against my company doesn’t make sense. We did not participate in more than three transactions in the subsidy programme. The documents used by the prosecutions were afterthought to prosecute my company.
The matter was adjourned till Wednesday, May 27, 2015 for continuation of trial.
Wagbatsoma and other defendants were formerly brought before Justice Habeeb Abiru’s of an Ikeja High court but the case was later transferred to Justice Okunnu following Abiru’s elevation. They pleaded not guilty to the charge.
EFCC is claiming that the documents presented by Wagbatsoma to claim the subsidy did not tally with the quantity of products supplied.
Meanwhile, Wagbatsoma, the oil subsidy fraudster, got a stiff bail condition on Wednesday, 27th May, 2015 as Habeeb Abiru, ludge of the Lagos High Court, Ikeja, slammed a N450 million bail sum on him.
Mr. Wagbatsoma, who allegedly fled to the US to avoid trial, is also expected to, among other conditions provide three sureties; two of whom must be resident in Lagos where they should also have landed property.
In granting bail to Mr. Wagbatsoma and those docked along with him – Adaoha Ugo-Ngadi, Fakuade Ebenezer, and Ezekiel Ejidele – Mr. Abiru said that the prosecution’s arguments were not enough to deny them bail.
This is coming on the heels of the fuel scarcity situation that Nigerians have been facing for several weeks now which obviously is one of the outcomes of the popular fuel subsidy fraud involving Wagbatsoma and his likes.
As we hope that the newly sworn-in president, Muhammadu Buhari will find a lasting solution to this problem, keep a date with this magazine as events in this fraud case unfold.