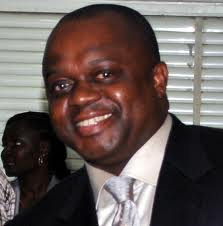 Prince Lanre Tejuoso, a medical doctor-turned politician is one of the major players on the social scene. The party scene is never complete without him in attendance. The Egba prince, who used to run his father’s clinic in Ilupeju area of Lagos, delved into other businesses before he ventured into politics.

Lanre was said to have ventured into tourism and later represented a company bringing treated mosquito nets into the country before he later dabbled into politics where he lost to Senator Iyabo Obasanjo-Bello but was later made commissioner due to his closeness to the present governor in Ogun State.

Several weeks back, the honourable commissioner for special duties, Prince Lanre Tejuoso was accused of involvement in a N300 million oil supply fraud as the man in charge of special duties and government assignment. It was reliably gathered that the issue is brewing controversy in the executive arm of government at the moment.

This son of highly respected and popular monarch Adedapo Tejuoso was said to have made a heartfelt acquisition in landed property at Lagos choice area. The property he acquired, we gathered, is a multi-million naira Lekki home and it was documented in his wife Mojisola’s name. Moji is the daughter of billionaire industrialist, Alhaji Razak Akanni Okoya the owner of Eleganza Group of Companies.

Prince Lanre is said to have eyes for beautiful things; his large appetite for beautiful babes was what caused enmity between him and Segun Awolowo, who happens to be his bosom friend. Sources revealed that the relationship crumbled when he discovered that Lanre was making passes at his wife Bola. It was revealed that ever since he became a commissioner in Ogun State, he has been secretly dating all the beautiful babes in most of the tertiary institutions in Abeokuta. He was said to have run into troubled waters when in his bid to satisfy his libido, he had invited his prey and one of her friends to one of the highbrow hotels in the GRA, Abeokuta, and in the process of getting down with the girls, the lady had an asthma attack.

The other babe was said to have shouted on top of her voice that the politician had used her friend for charms popularly called ‘juju’ and that it was greed that landed them in the mess. The commissioner was said to have called his PA to drop the ladies in the hospital which the lady refused, insisting that the prince must drop them himself at the hospital. He was later said to have complied to avoid further embarrassment after which he gave them N20,000 each.

The prince was also said to be so popular back in his days as a medical doctor especially among female students of the University of Lagos who saw him as a cheerful giver.