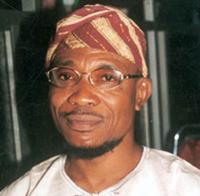 The executive governor of Osun State, Ogbeni Rauf Aregbesola and the paramount ruler of Ijesaland, Oba Gabriel Adekunle Aromolaran are not in good terms as you are reading this and it is authoritative. Global News gathered from a reliable source that the once rosy relationship which existed between the illustrious sons of Ijesaland went sour recently as a result of what some people term ‘greed’.

The highly respected monarch was said to have approached Ogbeni, as Aregbesola is fondly called, to tell him that he needed to be ‘considered’ in Aregbesola’s second term agenda. The consideration, we were told, involves nominating one of his wives for a political appointment as well as bringing in two other nominees for commissionership slot, a proposal Aregbesola was said to vehemently oppose.

When the meeting took place between the two, Aregbesola was said to have told him, “Kabiyesi, I have heard all what you said and I will get back to you.” This response might be positive to the monarch but it is actually a political statement from Aregbesola. When time was running out and a buildup to next year’s election had already started with no feedback from the governor, the king became very angry.

Aregbesola’s supporters are, however, crying foul claiming that there’s ‘greed’ on the part of the king that he would have simply maintained his position as a highly respected monarch instead of dabbling into political matters. The king’s loyalists would have none of that. They see what happened between Ogbeni and Owa Obokun as a gentleman’s agreement that must be fulfilled to. They said there was no crime in the king seeking favour from the governor who in the first instance is his son.