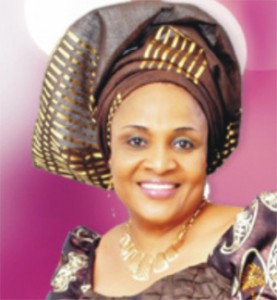 However, the deputy governor would not make anything serious out the first lady’s steps, seeing her as an outgoing person who likes to attend any functions in the state; sources even revealed that he’s also very quiet about the whole stuff because of the party’s current unpopular status in the state knowing it would create another crack in the party’s already fragile unity in the state.

The first lady who is a fashion designer was also said to have established her influence on her husband’s cabinet when she single-handedly masterminded the posting of their daughter Ajibola, to Oyo State to have her one-year compulsory National Youth Service Corps (NYSC). Not only that, she was also said to have made sure the young lady never spent a night at the NYSC’s orientation camp in Iseyin and apparently money must have exchanged hands to achieve this, and she passed out with NYSC State Honours Award for doing nothing, along with four other deserving recipients.

As if sitting on the driver’s seat when it comes to the state governance was not enough, the first lady is believed to be living as if she’s on a mission to help finish the state resources together with the first daughter Bisola who uses every opportunity that comes her way to show how wasteful she can be. Criticisms had earlier trailed the first lady for what can be termed flagrant abuse of power when she decided to accompany her husband who allegedly claimed he had converted to Islam on pilgrimage to Mecca to the detriment of many that really needed it only for her to repeat another of such trip to Israel.

The woman’s collection of trinkets in gold, sources revealed, will give American gold reserve a run for its money; she’s alleged to be investing heavily on jewelries. Her love for jewelries, sources also alleged, has taken her out of the country countless times with all the expenses paid by the state government and it is the belief of many that if she continues with her jewelry acquisition it is a matter of time before the state goes bankrupt.