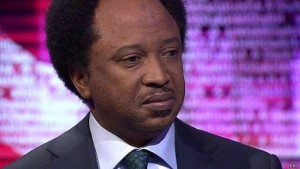 The Senator representing Kaduna Central in the Nigerian Senate, Shehu Sani, on Tuesday challenged the Code of Conduct Bureau to look into asset declarations of other Governors who served at the same time as the President of the Senate, Bukola Saraki, saying politics should not be mixed with anti-graft war.
Mr. Sani spoke at the 8th Forum of the laureates of Nigerian National Order of Merit in Abuja where he criticized Nigeria’s anti-corruption campaign as being driven by political considerations.
According to him, after insurgency, no issue should dominate national discourse more than corruption. He said political considerations could hamper the anti-graft war.
Mr. Sani said corruption had consequences, referring to the ongoing investigation into arms deal supervised by the former National Security Adviser, Sambo Dasuki.
“Corruption has consequences as seen in the arrest of those in charge of security in the last administration,” Mr. Sani said.
“Insurgency is for some industry, business enterprise and means of making money.
“Even Governors would say they allocate hundreds of millions to security but when you go there you won’t find anything.
“They say because of allocation to security they can build schools. So it is for all of us to see why we have not won the war against insurgency and why people are killed because of corruption,” he said.
“Politics mixed with corruption will take us nowhere,” Mr. Sani said.
“It is only in Nigeria that one says because somebody has contributed to the success of the ruling party, corruption charges should be withdrawn against him. But if he falls out of favour tomorrow, then, EFCC will bring up the remaining charges.”
He then queried why the Federal Government would arraign Mr. Saraki for alleged false declaration of assets without causing same action against others who served as governors when the Senate President did.
“If Saraki is tried for falsely declaring his assets since 2003, CCB should do same to all others who served in that era.
“Many issues that have to do with laws are stained by politics and they lose their credibility,” he said.
Speaking further, he challenged public officers to publicly declare their assets.
He said, “After President Muhammadu Buhari declared his assets, I followed him and did same. But only about three of us have done so out of all public officials in the country.
“Some people will say they are like Buhari in everything. When he says change, they also say change. But on the issue of asset declaration, they failed to be like President Buhari.”
He reiterated the support of the National Assembly for Mr. Buhari and assured that the Senate is ready to get and utilize inputs from the public.
“Let Director of Public Prosecution be independent of the Attorney General”
Also speaking, former President of the Court of Appeal, Ayo Salami, said anti-corruption war would be effective if the Director of Public Prosecution becomes independent of the Attorney General of the Federation which is held as political appointment.
According to the retired Justice,the DPP was insulated and not under AGF under the 1960 Constitution.
“But now the decision to prosecute or not is political because the DPP is under Attorney General,” he said, adding that “it began when Elias came from Oxford and he thought the DPP should not be earning more than him and should be taking order from him.
He said the DPP must be insulated and his removal should be approved by the Senate only