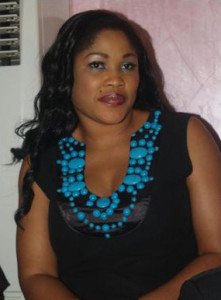 Popular Nollywood actress, Bisi Ibidapo, we gathered has joined the league of actresses who have moved closer to God. According to the information at our disposal, the mother of one has decided to turn to God since her pregnancy tales. She was allegedly said to have been shocked with the faallout of her pregnancy and child bearing event, and another factor is the fact that she and Lola Alao would have drifted over Dino Melaye issue which became a mystery to her.

A busybody said recently Bisi has been sighted severally in church. Not only that she has also stopped attending functions like before, that if she is not directly involved in an event, she will not appear there.

Bisi Ibiodapo-Obe is one of the most beautiful faces that have graced the movie screens in the Yoruba genre of Nollywood. Kogi State-born actress, Lola Alao and Bisi were once close friends. According to gist merchants, “the Dino Melaye” saga was the cause of their breakup. Actually there was a time no one could come between these two actresses until that moment. A bird squealed Lola Alao who hails from the same state with Dino is a pimp, so she was the “matchmaker” between Bisi and the former House of Representatives member.

No one really knew when the whole thing started between the one-time buddies until the news about the “Omo Logba Logba” actress spread like wildfire. It was actually a messy one and the light-complexioned actress became the talk of town.

The fact that Dino denied the pregnancy made the whole issue more dramatic in nature. The beautiful actress has since bounced back after the pregnancy scandal and she is doing well.

When Global News called to hear her side of the story, her first response was, “Who said that? Everyone is a born-again Christian, I have been a Christian all my life.” And she added, “I’m still like I am, nothing is changed about me.”