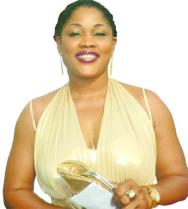 Star actress Bisi Ibidapo-Obe is not new to grabbing the headlines for the wrong reasons, though that has been on vacation for sometime now. Bisi who became prominent for the role she played years back in the Olabisi Omologba Logba, a movie about a lady who lives a reckless lifet, the character which she interpreted well, seems to be living her role in the movie in real life. Bisi’s name means so many things to different people. She was once linked to popular fuji musician, Wasiu Ayinde Marshall, KWAM 1 or Oluaye Fuji, whose house she moved into with the hope of settling down with him, but was sent packing due to what many people close to the fuji star described as her unrepentant way of life. It was learnt that the fuji musician was really keen on marrying her but backed out because he didn’t see the qualities of a good housewife in her. Bisi who loves to enjoy life to the fullest teamed up with another fuji musician, Wasiu Alabi known as Pasuma but the relationship packed up and since then she has been moving from one relationship to another. There was a time she was said to be heading to the altar with an undisclosed lover, only for the story to change later. At another time she was linked to one of Nigeria ‘s top musicians, Michael Stephens popularly called Ruggedman or Ruggedy Baba by his fans. There was also a time she had crisis with then upcoming act, Timaya, over the issue of dating or not dating, when she tongue-lashed Timaya who she saw as very small to date her. The matter nearly escalated to something else as Timaya claimed she was the one making the move. It eventually died down. Omologba-logba was at a time said to be dating another Dublin big boy, until about two years ago when she decided to go underground and little is heard about this beautiful actress’ controversial sex life. However, we recently stumbled on information that Bisi may have found comfort with a Nigerian London-based singer Dewaves. Findings that the Dayo Sanni, popularly called Dewaves, and Bisi met in London sometime ago when Bisi and some or her colleagues went for a project and one thing led to the other, transforming into a sizzling secret love affair. Bisi’s new found relationship did not come as a surprise to many as she’s known for her love for stars and can be described as having hot pants for such. It is the prayer of many of her fans that she will at least settle down this time around, as it is becoming highly embarrassing that she’s still single, considering the numerous men that have passed through her life, and with age no longer on her side.