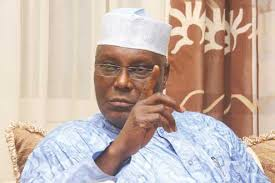 If the report at our disposal is anything to go by, then the refusal of the leader of the major opposition party, the All Progressive Congress {APC} in Adamawa state, former vice-president Atiku Abubakar to sponsor the campaign organization of the governorship candidate of the party, Alhaji Jibrilla Mohammad Bindow, in the state has plunged the state chapter into serious crisis.
One of the party’s stalwarts in the state, who spoke to journalists in Yola on Monday on the condition of anonymity admitted that Atiku’s refusal to sponsor Bindow’s campaign organisation has affected the struggle.
He however pointed out the reason for this development saying the reason for Atiku’s refusal to fund the party was as a result of the political rivalry between him and Bindow as according to him, Bindow had always worked against (him) Atiku politically.
The party chieftain alleged: “Even during the last presidential primaries of the APC, news went round that Bindow did not support Atiku, his statesman, but they said he supported Governor Rabiu Kwankwaso of Kano State.”
He said another reason was that Bindow defeated Atiku’s proposed candidate,
Alhaji Ibrahim Yayaji, during the last governorship primaries of the party in the state and was going about boasting that he could win election without Atiku’s assistance.
The source also alleged that when the news got to Atiku, he decided to keep quiet and watch Bindow who has not shown any remorse over his utterances that allegedly belittled Atiku’s political integrity.
In another development, the Bindow Campaign Organisation has accused the stakeholders of the party in the state of their refusal to fund the campaign organisation ahead of the coming elections.
The deputy director, Bindow Campaign Organisation, Alhaji Abdurrahman Jimata, made the accusation at the party stakeholders’ meeting held in Yola saying the stakeholders have refused to donate funds for the campaign organisation to strategise. Abdulraman decried the lack of donations to the campaign coffers by stakeholders, stressing that the development would not help the campaign team to execute various plans they have.
He explained that the people on the campaign train sponsored themselves during the last campaign tour before the postponement of elections.
His words “Nobody contributed money for the campaign activities but we heard all sorts of things. Honestly, there is no donation from anybody no matter what the people may think.”
According to him, the party is keeping record of those who are investing their time and resources for adequate compensation if the party wins the election.
Abba announced that the party would embark on fresh tour of the 21 local government areas with a view to mobilising voters.
However, the success of the current fight against the insurgency by the federal government and the troops has aided the APC gubernatorial candidate, Bindow, to relocate to Mubi for a house-to-house campaign.
As the situation stands, nobody can state categorically what will be the chances of APC in Adamawa State in the forthcoming polls as these two political gladiators lock horns. Only time can tell.